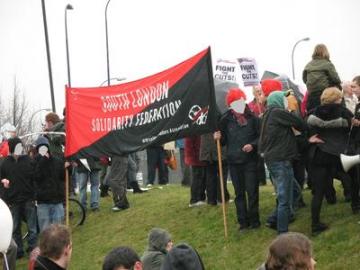 On 19th February 700 people marched through Lewisham to protest against local and national austerity measures. The “Carnival Against Cuts” had starting points all over the borough which converged at the Town Hall and marched to the centre of Lewisham. Despite the rain there was a good atmosphere with a samba band, singing, chanting and even SolFed members in wigs! The usual speeches were made by the usual people but 700 people on a Lewisham protest is not usual. It’s a positive sign but much more needs to be done.

The cuts are attacks that are directed across the entire working class, with no section spared. Savage attacks on the unemployed, sick and disabled sit alongside mass public sector redundancies, and attacks on parents accompany increasing prices through the VAT increase. But if we fight together - from workers and the unemployed to students and retired people - we have the power to stop these attacks and fight back.

However, if we want to win, we need to recognise that being right isn't enough. It’s a matter of power, and Where we have the most power is in the workplace. If we go on strike, hold a go-slow, call a sickie, anything that allows us to work less on the bosses' time, we can disrupt the economy. Protests can be policed and controlled but a spanner in the economy causes real damage to their profits, and is our best chance of making the government abandon its cuts agenda. Along with workers' action, economic blockades of transport hubs and crucial roads are also an option. But let's be clear: these must be the actions of masses of people, since an activist minority will quickly be arrested and silenced. We don't need martyrs, we need results!

With sufficient rank-and-file anger, the trade unions may be pushed into calling a general strike – only the second in British history. However, it’s us, not the union bosses - on the rich list themselves and in bed with Labour - who can stop the cuts. The TUC has dragged its feet on acting against the cuts, waiting for the Labour party to figure out what to do, seeing as how they promised us cuts too last May. All unions can offer us is sellouts like Aaron Porter from the NUS. We can’t put our faith in anything other than our own solidarity and ability to organise. We must take a lead in organising ourselves rather than waiting on the TUC or anyone else to do it for us.

Most importantly, we need to recognise that stopping the cuts is more than just a numbers game. The biggest imaginable march past Parliament won’t reverse policy. Only mass direct, industrial action will.

This article was published on 23 February 2011 by the SolFed group in South London. Other recent articles: