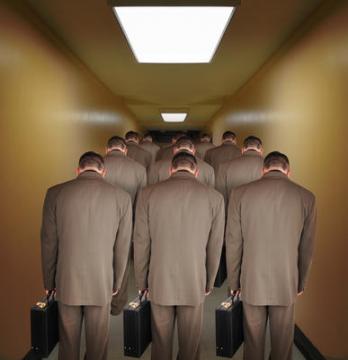 A private sector worker and SolFed member speaks out about why they have joined in the resistance against privatising public services - and argues for the struggle to spread to the private sector itself.

Originally written for the Oxford Save Our Services blog.

There has been much praise heaped upon the private sector recently. Successive governments have argued that opening up public services to the private markets is a good thing. The private sector is more efficient, more dynamic and more flexible than the old-fashioned public sector, they say. The one thing all this praise of the private sector has in common, however, is that it all comes from people at the top. From the businessmen and their friends in parliament. You'll not hear much praise from someone like me. After all, I'm just the person who makes them their money.

I'm a private sector worker. According to the accepted media line I'm supposed to hate the public sector, filled with rage at the supposed 'perks' these people enjoy at my expense. Yet I was out there on the streets supporting fellow workers on June 30th and if I can I'll be out there again on November 30th as well. This is a big risk for me, I work in a sector with precarious job security and with almost no workplace organisation for defence should my bosses turn against me. I've seen workmates sacked for far less than pulling a day off for a strike. Yet I don't do it in spite of being a private sector worker, I do it because I'm a private sector worker.

There is one thing that should be made clear. When an industry becomes privatised, it becomes focused on one thing and one thing alone: making money. People know this of course, but it's only by working in a private sector workplace that you really see what this means up close. I work in a 'creative' industry, of the sort that many people dream of working in. Yet the reality is that anything that does not directly help pump up the profit margins is carefully squeezed out by managers and executives. I've watched as my company has become financially more and more successful, and in the process move from being a place of creativity and energy into a simple production line. All thought of making something 'good' or of intrinsic creative value has gone out the window. Only to be replaced by the drive to make something 'profitable'. This is what we are expected to get out of bed for. I have been at work when the shareholders are in for their meeting. I have felt them stood behind me, watching me work. I know they neither understand nor care about what I do or why I do it. Their only concern is that I'm making them profit, that I am a 'profitable' human being.

This is why I have joined the struggle to save public services from privatisation. What I have seen the shareholders and the investors do to my industry I know full well they will do to public services, and they'll have no qualms about doing so. Public services were made public precisely because they involved things considered too important to leave to speculation and profiteering; the care of the sick and the elderly, the education of our children, the free availability of books to those who wanted them. If these services are opened up to the markets then these things will be pushed out in favour of profit, no matter what the sleek marketing may say.

Perhaps the most terrifying concept is that in this brave new world everything will be considered a possibility for market involvement. A world in which everything is judged by profitability. My sector's triumph over the 'decadent' and 'wasteful' public sector. Yet it won't be the triumph of people like me. It'll be the triumph of the wealthy few who believe they own me, freeing them to further exploit human beings in the name of personal wealth.

That is why I stand against it. Because they cannot be allowed to take these things from us without a fight. If we believe that human beings are more than just machines for producing wealth for the few, if we believe that our world is more than just one huge factory floor, then we must resist. It is not just the practicalities of privatisation that we must defy, but the very principles that drive it. Why is it so important to stand against the principles of those who own the private sector? Because that is a struggle that unites us all. From the healthcare worker fearing life under a new private owner to a low-paid retail worker who already lives there. Some of us in the private sector are trying, secretly and slowly, to organise ourselves to fight back against our conditions, and are reaching out to public sector workers to fight our common cause.