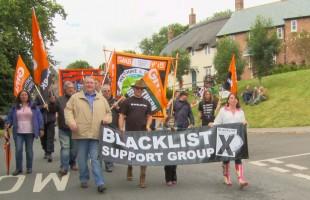 It is a disgrace that public funds are being spent on blacklisting trade unionists on the Crossrail project.

Workers have been dismissed from the largest construction project in Europe for raising safety concerns about high voltage cables and for joining the UNITE union. For nearly 3 months there have been daily protests about blacklisting on Crossrail and the firms involved have constantly denied that it is taking place.

In addition Ron Barron, the most senior industrial relations officer on the entire Crossrail project has lost his job last week after investigative journalists discovered that he was a proven blacklister having cross-checked job applicants against the secret blacklist of workers to be barred from the industry, a list that he helped to compile. An employment tribunal found that he introduced the use of the blacklist at his former employer, the construction firm CB&I, and referred to it more than 900 times in 2007 alone.
The evidence of blacklisting on Crossrail is damning and overwhelming - none of the blacklisting firms are now even attempting to deny that these discussions took place.

This is a major systematic breach of human rights by big business subsidised by tax-payers money - when are they going to come clean?

Crossrail and the construction firms on Crossrail should make a public apology, pay compensation and reinstate all the UNITE members who have lost their jobs on the project. A union recognition agreement on the project is required as a matter of urgency for the public to have any trust in these people.

Watch a film about blacklisting here.

At our 2011 conference, SolFed passed a motion supporting the Blacklist Support Group in their fight against the scourge of blacklisting trade union members.