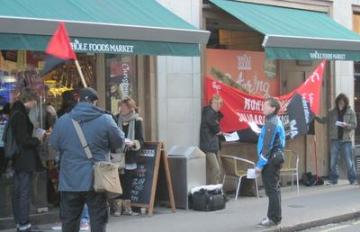 Today saw the London Solidarity Federation hold a picket in support of a victimised Whole Foods worker. The action was held in conjunction with protests in Boston, New York, Minneapolis, Seattle, Portland, Reno and San Francisco.

The demonstration had been called in defense of Natalia, a San Francisco Whole Foods worker who was sacked for speaking up in support of herself and her workmates and took place outside the Soho branch of Whole Foods in London.

The picket was a resounding success. SF members turned up from both the North and South London locals (including a visitor from Hull SF) and were supported by Anarchist Federation members and trade unionists. Public reaction was overwhelmingly positive, with numerous customers not only vocalising support, but refusing to go into the shop. Some of the most vociferous supporters even went into the store to speak to management about the abuses taking place in San Francisco. This activity was bolstered even further as SolFedders entered the store to speak to and flier customers directly.

Our message to Whole Foods is simple: International solidarity will continue until Natalia is reinstated with back pay.

The flier we handed out is attached.

This article was published on 22 December 2011 by the SolFed group in North London. Other recent articles: