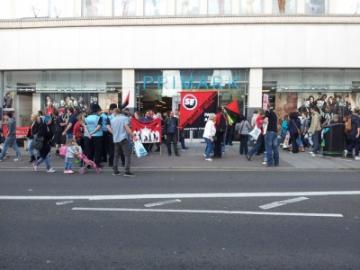 On Saturday, the Lib Dems' party conference was in Brighton. Following a protest march, there were simultaneous mass pickets of firms using workfare across Brighton. Rather than simply 'having our say' and being ignored by politicians, the idea was to disrupt a high profile coalition policy - the forced, unpaid work schemes known as workfare.

Workfare means unemployed people being forced to do unpaid work for their benefits. Workfare is a state subsidy to private businesses, providing free labour and undercutting the minimum wage. The government’s own research found that in countries that introduced workfare it could actually lower a jobseeker’s chances of finding a job. Where previously these roles would have been filled by paid staff, employers get to take advantage of a growing pool of jobseekers they won’t have to pay.

Two Poundland stores, Primark, Superdrug and Argos were picketed. We had lots of conversations with passers-by, many of whom were unaware of the schemes. 2,500 leaflets were distributed in under an hour. The pickets were jointly organised by Brighton Benefits Campaign, Brighton Solidarity Federation, and Brighton Uncut.

This article was published on 24 September 2012 by the SolFed group in Brighton. Other recent articles: