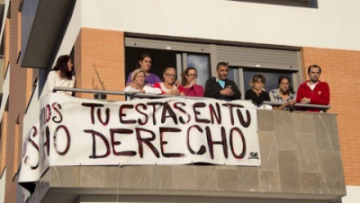 A solfed member visited Corrala Utopia, a block of flats in Seville squatted by evicted families who have lost their jobs due to the crisis.

When I arrived at the corrala, the first thing I saw was a small boy fetching water from a drinking fountain. He was filling bottles and placing them carefully in a big bag, which his mum was waiting to pull up to the window on a rope. The corrala have had no water or electricity since the local council ordered them cut off, despite the presence of forty children and old people in a frail state of health.
Corrala Utopia was squatted in the spring of 2012, originally by 11 families. The movement has grown and there are now 6 corralas in Seville, three in villages in the province, and a new corrala recently opened up in Malaga.
The original 11 families had gone to the 15-M assembly for afectados,  “people affected by housing”. Some of them already knew each other as they were tenants in council flats, who were evicted after they couldn’t meet the rent when they lost their jobs (unemployed people don’t really get housing benefit in Spain.) As soon as word got out, people flocked to the corrala looking for lodgings. The occupiers of the soon very full corrala organised meetings with these families to help them to squat new corralas, organised according to district, leading to the spread of the corralas all over the city.
The council are intransigent about the water and the power, meaning that the inhabitants have to use candles, lamps, generators (which they told me, cost them one euro an hour to run) and also rely on the generosity of friends and neighbours, who let them charge up phones. When I was there people were on the roof installing a solar panel and they were charging some solar lamps. In a protest about the water cut off, women from the corrala went to the main square in front of the town hall and washed their children’s clothes in front of the tourists.
The occupiers said they feel very moved by the all the support they have had and they have got involved in supporting strikes and protests by other people affected by the crisis. During the general strike, they blocked the S-30 ring road, which passes near the corrala, and they have been active in helping the new corralas.
There are forty kids living in the corrala and I asked how they were managing. In the beginning some of them were very frightened after the police came to the corrala displaying a very threatening and aggressive attitude, despite the presence of so many children and old people.  Some children didn’t sleep properly for a long time after the police visit because of the threats the police were making to their parents. But now the children are all adapted and happy, although they need to help out with a lot of domestic tasks such as fetching water, because the chores are more difficult without electricity and running water. Most of the children attend the same school which helps them with any timidity they feel in front of their classmates. Some are very proud because their house has been on television. When the adults have their weekly assembly, the kids also have one, which has made demands to the adult assembly, which they usually win. One demand was that they all be taken to Alamillo park to play football.  Recently one of the kids remarked, “How happy we are without the TV!”

This article was published on 5 March 2013 by the SolFed group in North London. Other recent articles: