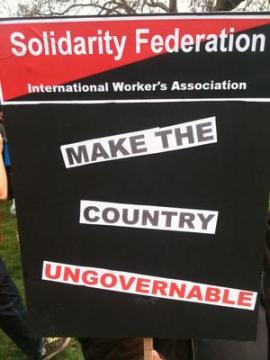 After we set off, the march passed largely without incident until the police tried to direct us away from the route which would take us over Westminister Bridge and allow us to feed in to the main march. There were several moments of confusion, until a group decisively broke through and brought the rest of the march along with us. This led to a rather proud moment where a line of police blocking the bridge stepped aside for a mass of several hundred people, the Liverpool Solidarity Federation's banner at its head.

Crossing the bridge, we could see the TUC-organised "march for the alternative" snaking far ahead and far behind the point that we entered it. It was enormous, and densely packed, yet we couldn't see either the front or the back. The TUC states that they stopped counting at 250,000 people, and the media's most generous estimate is 500,000, but there had to be at least a million people protesting in London that day. If not more.

The result of this was that the march moved extremely slowly. It was so densely populated that holding a banner aloft was difficult at best.

We shuffled past the fortress that Westminister had become, lines of police staring stone-faced at us from behind crash barricades. The pace picked up as we went beyond Downing Street, where protesters engaged in pantomime by hurling a chorus of boos at the abode of a Prime Minister who was very far away from the protests against his government.

As we travelled down the route, we kept seeing the green bibs of Liberty, operating under the pretence of "legal observers." All had their backs to the police, watching the protesters. Later reports from other comrades suggest that they were pointing out people to the intelligence gatherers of FIT, and even taking photographs themselves. None of them handed out bust cards, as the genuinely independent legal observers of the Green and Black Cross were doing. They were part of the police operation and not there for our protection.

At Trafalgar Square, up to a hundred people were congregating around the base of Nelson's column, with a couple sitting on the backs of the lion statues. Further back, a huge banner had been unfurled that stated: "we demand regime change!" The occupation of the square was due to begin at 5pm.

When the Radical Workers' Bloc reached the square, its participants stepped out of the march. Copies of the booklet No Comment: The defendant's guide to arrest (PDF) were handed out. The bloc then reassembled itself to march through Trafalgar Square, separate to the main march, and on towards Oxford Street.

The breakaway march was good natured and lively from the offset. North and South London SolFed's banners were at its head, with Liverpool's not far behind. Chants rang out: "1-2-3-4! This way to class war! 5-6-7-8! Organise and smash the state!" At this point, there were roughly 300 people marching.

When we reached Oxford Street, UK Uncut activists were already there to engage in actions against Topshop, Vodaphone, and other tax dodgers. However, as soon as the Radical Workers Bloc turned on to the street, the police started to draw together. It quickly became apparent that their intention was to kettle, and we turned off down another street to avoid them.

Marching around the streets behind Oxford Circus, the bloc held together impressively. Directions and information were relayed from the front to the back and vice versa through megaphones. We were able to respond rapidly to police movements, whilst not being reckless enough to rush cut differet sections of the bloc off from one another. The only question now was how long we could continue to lead this chase and exactly what the end goal was. At this point, nobody was entirely sure.

We managed to push back onto Oxford Street, and surged up the road, passing the UK Uncut demonstrators once again. Chants of "who's streets? Our streets!" rang out. Any police we passed were met with cries of "your jobs next!" Though not much sympathy for that fact. As we moved along, we passed several riot vans - all of them full and sat waiting.

When the march went past past HSBC, smoke bombs were set off. Red smoke rose into the air, followed shortly after by green smoke. Some people charged at the doors of the bank, attacking them with boots and flagpoles.

When the door fell in, the move to occupy it fell back at the shout of "here's the riot police." A significant section of the crowd surged backwards. Police in full riot gear moved to protect the entrace, shoving away anybody who was too close. This use of force in defence of property was met with a hail of paint balloons, sticks from placards, and bottles.

Though this has already been written up as "attacks" on the police, none of these things had the potential for any serious injury, and the bottles were plastic - most likely the ones people had been drinking from during the march. This was not "violence" but a legitimate expression of class anger. Property damage will be an inevitable part of any campaign which seeks to halt the cuts by inflicting damage upon the economy through direct action such as blockades and occupations.

The police responded by attacking the crowd and there were fights as the bloc struggled to get away from this and move on.

Members of Liverpool SolFed found it necessary to break away at this point and regroup elsewhere. By the time we had, the march had moved on and found a number of other targets before finally rallying outside of and joining the UK Uncut occupation of Fortnum and Mason.

There, again, the police sought to use violence in defence of property, kettling those who had already left the sit-in of their own accord.

But if you wanted to witness police brutality (and media bias) at its height, you had to watch the coverage of the Trafalgar Square occupation. Those who took over the space were not, even if you accepted the mainstream definitions of violence and direct action, thugs or hooligans. They were revellers, building fires and setting up campsites in order to make a stand for 24 hours.

This, after being made a fool of by anarchists earlier in the day, was more than the police could tolerate. Reports from those in the area came, via Twitter, of journalists being forcibly removed before the protesters were kettled and attacked. But, if we challenge established power, we should expect nothing less from those who enforce the state's monopoly of violence. The question is whether we have the mechanisms in place to provide support and solidarity to those who fall victim to them, as both the Green and Black Cross and the Legal Defence Monitoring Group are trying to build. Today's solidarity demonstration for those jailed was also an important part of this.

More broadly, it needs to be recognised that whilst the aim of local protests is to draw people in to a movement as something to build from, national protests need to be built to. The sheer weight of effort required to build up numbers that means something needs to come out of them other than a passive march from A to B and some speeches at the end. Break-away marches and direct action as an expression of class anger are more than justified in that respect.

But even so, they mean and accomplish nothing if that is the end of it. If anarchists went to London for a riot and that's that, there was no point. However, if we are able to push the momentum of the direct action into a broader movement of active resistance, then it becomes a genuinely pivotal event.

What has to follow next is to build from attacks upon the economy in the middle of London to attacks upon the economy as a whole. We are already active on the picket lines of striking workers, fighting our own bosses and showing solidarity with the struggles of others. There have also been occupations of closing services, and moderate examples of economic blockades which could be far more effective if fired with militancy.

The point now is to turn them from outstanding events into the norm, not as part of an "argument," but as a tactic. If we want the government to back down, the cuts must become the more expensive option. We have to make the country ungovernable.

This article was published on 27 March 2011 by the SolFed group in Liverpool. Other recent articles: