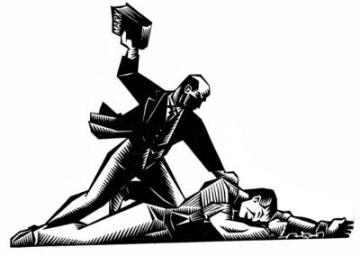 The most obvious of these are the various Leninist/Trotskyist parties, who are openly vanguardist in theory and practice (derived mostly from the writings of Lenin). Leninist theory states that the working class is by itself unable to achieve the required consciousness to challenge capitalism, and so requires a political party led by professional revolutionaries to lead it – a vanguard party. The concept of leadership is very important. Trotsky himself wrote that "the historical crisis of mankind is reduced to the crisis of the revolutionary leadership" and this perspective continues to inform his contemporary followers.

This means that vanguardist politics of the Leninist/Trotskyist kind aims essentially at securing leadership of various campaigns and organisations. The clearest recent example is the attempts to unseat NUS President Aaron 'Despicable' Porter. The problem here is that the mass, direct action and social disobedience witnessed at Millbank and subsequently in London and across the country has already bypassed Porter and made him irrelevant. So to channel that energy back into replacing Porter with a member or fellow traveller of some Trotskyist party is to recuperate the movement, to go from mass, self-organised direct action back onto the terrain of representative politics, where action once more becomes the preserve of privileged actors – the 'revolutionary leadership' of the vanguard party. The proliferation of anti-cuts fronts, all calling for unity whilst splitting off under the leadership of the different Trotskyist parties has to be understood in the same light.

Vanguardism lives by sucking the life out of mass movements, and lives the more the more it sucks. But Leninists/Trotskyists are only the most obvious, because they are self-described, kind of vanguardists. Vanguardism also exists in the form of radical liberal activism, often aping the language of anarchism.

Radical liberal activism talks about 'direct action', but it has a very different take on what that means compared to anarchists, based on a very different reading of history. For anarchists, Emile Pouget sums up the concept eloquently: "Direct Action is a notion of such clarity, of such self-evident transparency, that merely to speak the words defines and explains them. It means that the working class, in constant rebellion against the existing state of affairs, expects nothing from outside people, powers or forces, but rather creates its own conditions of struggle and looks to itself for its means of action." This is the original idea of direct action as mass, collective, working class action carried out by workers themselves. For anarchists, it is mass struggles which change the course of history – winning things from the 8-hour day to universal suffrage.

However, the clarity and self-evident transparency that Pouget saw in the term 'direct action' has given way with the later emergence of a rival conception which in many ways is the opposite of the anarchist one. This radical liberal version is best summed up by an oft-quoted maxim by Margaret Mead: "Never doubt that a small group of thoughtful, committed citizens can change the world. Indeed, it is the only thing that ever has." Here instead of mass, collective, working class action we have individual, exemplary action by 'committed citizens'. A clearer example of the gulf between anarchism and liberalism would be hard to find.

It is this liberal version of direct action that also ends up in vanguardism. Once more the task of social change is taken away from the workers themselves and entrusted to a group of specialists acting on their behalf. However, instead of a vanguard party, here the specialists are "committed activists" willing to sacrifice themselves to arrest and police brutality for the cause of justice. There is no doubting the sincerity, and often courage of such activists. But such a mode of action is nonetheless vanguardist – activists are substituted for the working class in our emancipatory struggle.

This has practical implications for anti-cuts struggles. The liberal conception of direct action promotes tactics which privilege individual actions, often favouring 'accountable action' where arrest ceases to be an occupational hazard but part of the objective. Activists encourage people to glue themselves to crime scenes and get criminal records which can seriously hamper employment possibilities. For full-time activists this isn't a problem (whether they scrape by on the dole or are personally wealthy enough to not need a job). And many students don’t realise the consequences further down the road – consequences which apply disproportionately to working class students lacking the connections of their more affluent peers.

Encouraging people to sit down and be beaten by police is rationalised as providing outrageous footage – a sign of the righteousness of the cause, no doubt informed by a Mead-style misreading of the history of US Civil Rights and Indian Independence struggles (which were won by mass struggles, not individuals martyring themselves). In fact police violence is explained by protestors not being passive enough – the cries to 'sit down, sit down!' effectively blame the victims of police violence. The youths who fight back against the police don't 'get it'. Lacking the 'correct' consciousness, they should leave it to the specialists in social change.

But most importantly, by separating action from class struggle, the liberal activist idea of 'direct action' dooms us to defeat. The only power workers have, whether currently employed or not, is in disrupting the economy. Vanguards acting on our behalf, no matter how committed, sincere or courageous simply cannot stop the cuts; the numbers of people willing to be assaulted and arrested as a point of principle are simply nowhere near sufficient. Which is reassuring when you think about it. On the other hand, thousands of young people have already shown a willingness to resist police attacks, break out of kettles and inflict property damage. This mass, self-organised collective action just might generalise into a movement capable of disrupting the economy and stopping the cuts. All attempts to channel it into vanguardist politics of any kind can only throttle that potential.

This article was published on 26 January 2011 by the SolFed group in Brighton. Other recent articles: