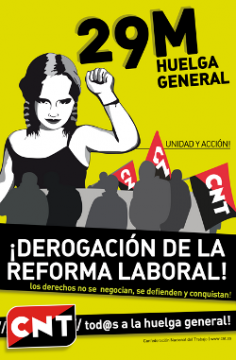 The CNT rejects any kind of negotiation over the rights conquered by the working class through years of struggle. We call for this strike with the primary objective of immediately repealing the the labor reform that was approved yesterday by the Parliament, which we consider a head-on assault against the working class. This reform continues the measures started by the previous government, such as the labor reform of 2010 and the cuts to public employee salaries, to pensions, and to public services, cuts which are being deepened by the current government.

The CNT demands the end of an economic policy designed to make the workers pay for the crisis of the banks and the employers. This policy has led to an unacceptable number of unemployed workers, a number which does not stop growing, as well as to an impoverishment and worsening of the working class’s living conditions.

The CNT also calls this strike against the cuts. The strike will happen the day before the setting of the General State Budget which will incorporate a brutal attack against public services and social rights.

The CNT rejects the agreement reached in February between the CCOO and UGT unions and the employers’ confederation, the CEOE, as well as the amendments that those unions have presented to the parliamentary process of the labor reform. The CNT rejects these amendments as a valid alternative, since they share the spirit of the reform and assume the logic of the employers and the government, who suppose that the only escape from their crisis must come through the workers surrendering their rights, placing the working class into a position of weakness from the start. The same logic has already led these unions to accept the raising of the retirement age to 67, even after the general strike of September 29, 2010.

For the CNT, the strike on March 29 must be only the beginning of a growing and sustained process of mobilization, one which includes the entire working class and the sectors that are most disadvantaged and affected by the capitalist crisis. This mobilization must put the brakes on the dynamic of constant assaults on our rights, while laying the bases for the recovery and conquest of new social rights with the goal of a deep social transformation.

All of these reasons have led the CNT to make this call for March 29 on its own account. With this call the CNT wants to give coverage to everyone who is taking up positions for a real and continued confrontation that will pay back the assaults on the working class with the same force with which we are receiving them, together with all workers’ organizations that share these objectives and reject the policies of agreement and social peace.

For the CNT, a confrontational rejection of the policies and the bureaucratic union model of the CCOO and the UGT, and their discredit among broad groups of workers, must not become excuses not to take action or struggle. Instead, this rejection must spur us on to reinforce our struggle through a different form of unionism – one based on direct action, on autonomy, and on mutual aid. Against assaults of the magnitude that we are facing, working-class unity is fundamental. This unity must take place in the rank-and-file, in workplace and neighborhood assemblies, in industrial actions and pickets, until the mobilization against those who are responsible for and benefit from this situation – the employers, the banks, and the government – is turned into an unstoppable dynamic that raises a barrier against the temptation to turn the rights that belong to everybody into a bargaining chip that belongs to nobody.

It’s time for all workers – unemployed or employed, retired, on the black market, students, and the precarious – to say “Enough!” We must seize the streets rather than abandon them in order to impose our strength and our demands.

March 29 – everyone in the street, everyone on the strike.