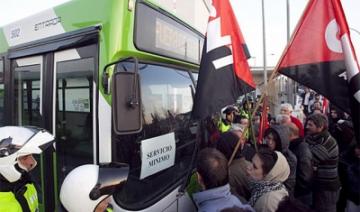 Thursday’s general strike in Spain was more solid and more militant than the last general strike a year and a half ago. As economic conditions get worse, people see their rights taken away and unemployment, eviction rates and prices all rising while wages go down, and they are reacting accordingly. This labour reform is the most aggressive attack on workers’ rights since the transition to democracy.

The general strike started before midnight with pickets of the wholesale fruit and veg markets which receive deliveries all night. There were pickets of up to a thousand people and in many cases all delivery trucks were successfully turned away. There were also midnight pickets at night shifts in factories and at post offices and depots. In many cities groups of pickets went round closing down bars which were open after midnight.

Early in the morning thousands of pickets gathered and roads were blocked in some cities by burning tyres or dustbins. In Madrid a “bicipicket” blocked the M30 motorway and a march blocked major roads in the centre of Madrid.

The strike is very strong in transport and industry. The level of electricity consumption has fallen by 26%, showing a drastic drop in activity.

Local assemblies which formed out of the 15-M movement have been involved in the strike, joining picket lines and going round closing shops and supermarkets, and there has been a high participation by the unemployed movement. Spain has the worst unemployment in Europe.

UGT and Comisiones Obreras have said that they will wait a month before organising more strikes, to see if the government withdraws the reforms, although they have already made it clear that they have no intention of changing anything. With everybody so clearly up for the fight at the moment, a month is a lifetime. We need an indefinite strike now.

The reports received from pickets all comment on the high level of police violence and aggression, much worse than the previous general strike. Dozens of people have been detained or injured, some very seriously.
More information as we get it, watch this space.

This article was published on 31 March 2012 by the SolFed group in North London. Other recent articles: