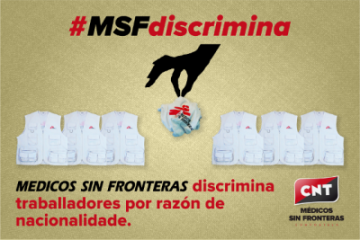 CNT-E has achieved recognition of the discrimination that Doctors Without Borders has committed since 2014 in their recruitment procedure. In that year, workers at the NGO managed to get their temporary contracts -whose use in this case was illegal- changed to permanent contracts. However, MSF did not change the contracts of two migrant workers.

CNT tried to solve the problem directly with the company. The CNT local in Santiago de Compostela (Galicia), where the conflict arose, held several meetings in which the company refused to remedy the situation. The hostile attitude of MSF led to a campaign against discrimination spreading throughout Spain: "Moitas cores, mesmos Dereitos" - "many colours, same rights".
In parallel, CNT sued the NGO for discrimination. Finally, courts have ruled in favour of the union - a small victory against a company experiencing growing legal setbacks.