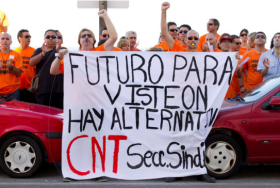 A successful international campaign took place on August 19th, in solidarity with the workers at the Ford Visteon plant in Cadiz (Spain). The workers are facing the threat of imminent closure of the factory, thus leaving more than 450 people unemployed.   Meanwhile, once again, we are reminded how multinationals can do and undo at will and with full impunity, even if it means leaving many families without a livelihood, as well as greatly affecting both the region and the sector because of the direct and indirect jobs that will be lost.

The plant is being closed in order to the move of production to other regions of the world where labour is cheaper. This is how global capitalism works, favoring multinationals such as Visteon which, having received state support (out of taxpayers’ pockets) and having taking advantage of their workers’ efforts and dedication, throw them away as soon as the opportunity to make higher profits elsewhere appears. Once again, the power of multinationals over whole countries is evident as they have the capacity to camp at will, unbothered and almost without any opposition.

This is why we believe that the only way to face them is via international coordination. Through the IWA (the International Workers’ Association), the CNT union section in Visteon and counting on the support received from other countries –we were able, in our small way, to organise an international day to show solidarity with the threatened comrades. We are aware that, in order to stop the severe attacks to work conditions, relocations and aggressive policies coming from multinationals against workers, there is no other possible effective response but international direct action and the IWA has done so with this efficient and tenacious campaign. We are convinced that with history backing us, our solidarity pact between member Sections and our action methods, we will be a fierce opponent to this scourge of capitalist entrepreneurship while it tries to manifest its greatest exponent, multinationals.

All sorts of actions were developed during the campaign, from sending faxes throughout the world and letters to the company sites to spreading the information to every corner in the planet.  Solidarity was shown by a number of IWA sections, such as PA (Slovakia), KRAS (Russia), CNTF (France), USI (Italy), NSF (Norway) and some other organisations like ATA (Mexico), Acción Directa (Peru), MASA (Croatia), ASIR (Romania), ESE (Greece), as well as in a number of countries which will be mentioned in the long report under preparation.  Even as we write this, we are receiving information about actions and support in other places.

Where the IWA has more presence, there were more forceful actions of information pickets and rallies in front of the company centers, undertaken by groups like FAU (Germany), ZSP (Poland), FORA (Argentina), SP (Portugal), SolFed (UK) and, of course, CNT (Spain).  Some IWA Sections are carrying out a broader information and action campaign in their regions after the events.

We do not believe these protests went unnoticed by the Ford Visteon board and its subsidiaries and we want to warn that, as the conflict intensifies, we will respond by increasing international action.

International Secretary of the CNT-IWA