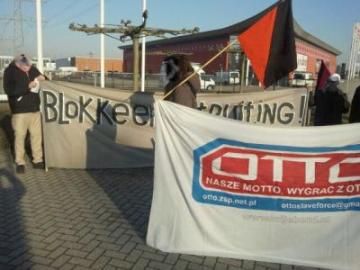 After a month of campaigning, pressure is mounting on the temp agency OTTO. SolFed's sister organisations in Poland and Slovakia, as well as the Dutch Vrije Bond, have picketed the agency after they learnt how they exploit especially Polish, Czech and Slovak workers doing temporary work in Holland.

Apparently, the company is trying to hush up the problem and satisfy the workers with partial concessions. However, no changes were made regarding for example housing conditions, and the CEO still claims there is no system of fines in the company. Also, more workers have contacted the activists and want to join the struggle, and the campaign is thus not over.

Help raise pressure on the agency by sending faxes and e-mails till Monday noon (28th March). The same day a meeting takes place between representatives of ZSP and OTTO Workforce. You can either send the e-mails from your e-mail address or use the e-mail form here.


Thank you for your solidarity and spreading information about this campaign.

Over the last few years, there have been tons of complaints about the practices of the Otto Workforce temp agency, in particular from Poles being sent to work abroad in Holland. It has found itself on at least one internet blacklist as an agency which cheats workers. Some people who work there or worked there in the past, have contacted AGA and ZSP about various problems, asking what they can do. At the very least, they ask us to warn people and inform them of their rights and what can be done if they are cheated.

From various letters, complaints on our internet forum and personal conversations, we present a preliminary list of the most typical problems. We are speaking to more people and are hoping to be able to present more facts soon. An information campaign aimed at potential and current workers should also start soon.

One of the most typical problems is that the work promised in Poland looks different in reality. Sometimes workers are told that they will be doing one job, but when they arrive in Holland, they are offered something completely different. Also, sometimes workers sign up with friends or family members in Poland and are assured they will work together, but may be split up upon arrival.They are typically promised 40 hours a week, over a certain period of time, but it happens that they don’t get a full work schedule or that there is no work for weeks. In the worst situations, people are sent back before they’ve earned any money.

Many workers are bused to many different work places; sometimes there is no work but people must be on call. Some workers estimate that 25-30% of their colleagues at any given time only had sporadic jobs, for example twice a week. Sometimes, in order to give more hours, people are forced to work overtime. An 11-12 hour day is typical for overtime, but there have been cases when people have to work even up to 20 hours a day.

It is rare (but has been reported) that workers don’t get at least minimum wages – but typically a good portion of the money is eaten by OTTO. The first thing is the overinflated housing payments. There are also other deductions – for example, for insurance. Money is returned by the Dutch government for insurance (300-400 euros a year) but is sent to Otto, not reimbursed to workers.

Newly arrived people work without proper documents (ie. SOFI), for a few weeks. They are not given paid vacation or extra payments on holidays. Despite the fact that insurance premiums are deducted from their salaries, they are often not paid for times they are ill and are fined for taking sick days.

The workers complain about numerous fines imposed on them. They are regularly fined especially at the workers’ hotels and barracks, where charges are invented, people even fined for being messy. This is often done in an arbitrary way and the company tend to charge all the people in a room for the infactions of one person. The workers often don’t find out about these fines until pay day and people who have complained have been shown the door.

Finally, there are sometimes problems with late payments. In cases where workers have been fired without notice, they have reported being sent away without payment and having trouble collecting anything.

Many people have complained about the housing conditions in many locations in Holland. This became well-known and articles were written even in the mainstream press.

Recently, some propaganda videos have appeared on You Tube, ostensibly presenting people who work at Otto showing off their fine living conditions. People who have been suppose that this is nothing more than the firm’s PR and that the conditions are not like in the films. The films try to portray substandard housing in the woods as being something like a ”park”, or something like a nice summer camp.

The reality of these „camps” are a little different. Many of the places are quite isolated, in the woods, far from everything. They are often 20 kms from any city. Social life is contained around the company housing and even the “company store” or bar.

Workers also complain they have to wake up very early to be transported to work, often riding 1,5-2 hours. After work, since the bus picks people up from various locations, they may have to wait an hour or more to get a ride back. Often this means they can spend 3 to even 6 hours a day getting back and forth to work.

One place that many new employees live in is Laarbruch, in Germany, 20 kilometers from Holland. People are housed in converted former barracks of British forces near Weeze airport. Once a week, the company organizes abus to a shop, a half hour away. Dozens of rooms share one toilet and kitchen.

In the rooms, many people complain about mold, overcrowding, dirty facilities with broken equipment. Camping houses, like in Uddel, are not fit for living in winter. It is obvious that the agency and its cronies are running a racket, and earning off the workers in this way, by making them overpay for inadequate conditions. There have been incidents where workers who complained about the bad conditions were thrown out in the middle of the night without any notice, just to teach the others a lesson: keep quiet. Some people thrown out of the workers’ hostels were, in this way, also fired without notice and left without payment to fend for themselves. People who complain about housing have also been harrassed or did not have their contracts renewed.

The money earned on workers’ housing is considerable. In Woerden, 4-5 people are often housed together, each paying 280 euros a month, making the total cost more than 1000 euros. Local realtors rent whole houses for that price. Locals often offer flats for 300 euros, but Otto doesn’t like this, since they want you to be on call and ready to be picked up at their hotel. If they knock on your door at 6AM and inform you of work, you should be ready to go within 15 minutes. There was one reported case that somebody moved out of Otto housing and the company did not want to pick him up or find him any work.
Otto charges the same price for housing, regardless of the conditions. This also leads to a pathological situation where some will perform extra favours in exchange for a transfer to better housing.

Below is a letter written by some Polish workers describing what kind of problems they had with fines arbitrarily imposed on them through Otto housing.

Our names are P. and A.. We’d like to present the story of what happened to us in Holland. Upon arriving in this country, we came across an attractive offer of work through the OTTO work agency. At the end of October, we went to an interview in the office in the Hague.

We signed a three-month contract. The day before we were to leave for work, they changed the place that we were supposed to live in; we had certain conditions guaranteed in our contracts. The contract guaranteed us housing at the cost of 280 euros per person in a two-person room. The reality turned out different. They put us in a room with 4 people but made us pay the same price.

From the beginning we tried to change either the place of housing or the room, so it would be like they promised. Our manager said it was impossible to move. We were sent to the hotel manager, but we didn’t manage anything.

The big overcrowding in the workers hotel (120 people), created a stressful situation amongst residents. This was the result of too few bathrooms, toilets and the other facilities which the hotel should have provided.

* Delayed payment of wages. (And a week before the holidays, our weekly payments were short. Our monthly payments were also too low, not in accordance with the hourly rate. We received 190 euro for 2 weeks, and for one month only 270 euro.
* Residents at the hotel, besides paying 280 euro for housing, had to pay for clearning to a couple of people working and living at the hotel which the manager assigned.
* People were fined with yellow or red cards and the fines were taken out of our salary. These fines were deducted without our knowledge or any investigation. For example, we were fined for supposedly damaging a fire detector, which diddn’t work when we arrived. They deducted 400 euros from the salary of each of the four people living in the room.
* If you took a day off work, you were fined 13 euro. If you were late five minutes for the company transport, you were fined 15 euros, even if there were regular buses going to the workplace.
* If security was called to your room, 80 euros were deducted. Even people who are sleeping can received fine. One day, there was a conflict between A. and one of the people in the room, who hit him over the head. A. had to go to the hospital. He didn’t get a chance to explain the incident and, when he got out of the hospital, was called in by OTTO security. The security, instead of investigating or calling the police, fined everybody. Then, it turned out these two guys had a criminal history. They checked us for a criminal record when we signed a contract, but not them. A week later, the security threw one of the guys out. A. was denied medical insurance and payment (6 working days) over the 3 month contract. The manager just said that, given the situation, he could extend his contract by this amount of time.
* P. was fired the day before the end of the contract and said that the reason they wouldn’t extend it was that he told workmates about the problems with the temporary work agency.

For Polish workers: Zwiázek Syndykalistów Polski will publish more on OTTO plus information on what to do if your rights are violated in Polish on this page: pracownik.net.pl You can write to us at: is@zsp.net.pl
In Holland, please contact: agamsterdam@yahoo.com or ottoslaveforce@gmail.com