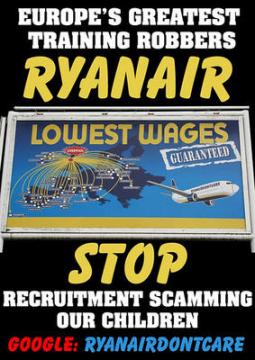 The Ryanair Don't Care campaign, supported by Liverpool Solidarity Federation, is calling for an international week of action against exploitation and recruitment-scamming by Ryanair starting on March 12th 2012.

The Ryanair Don't Care Campaign was started by John Foley when his daughter was sacked as a flight attendant mid-flight and abandoned abroad, penniless. This would lead to the exposure of a cynical and highly exploitative recruitment scam by the airline.

Ryanair’s current policy of recruitment-for-termination is part of the massive exploitation of people who apply to work for the company. As it stands potential cabin crew have to pay a fee of 3000 Euro through an agency to undergo training for Ryanair. As many as 60 people are sacked at any one time after this initial training period, up to 200 people a month. Those who survive are put on a 12 month probationary period on a lower rate of pay than normal cabin crew and Ryanair pocket the difference, as much as £20m a year.

Liverpool Solidarity Federation have already put their full backing behind the campaign, and behind John, who has been arrested six times for his direct action activism against the airline. We are now calling on others to do the same in support of the campaign's call for an international week of action against Ryanair in March.

We call on other Solidarity Federation locals, the International Workers' Association, and all who support the struggle of workers against exploitative employers, to take the following action:

End recruitment scamming! End the exploitation of workers at Ryanair! Support the week of action against Ryanair!

To contact Ryanair and complain about their practices, below are the easiest ways to contact them. More are listed here.

This article was published on 4 January 2012 by the SolFed group in Liverpool. Other recent articles: