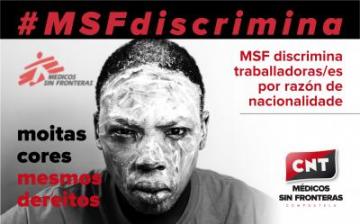 The CNT (an anarcho-syndicalist union in Spain) workplace branch within Doctors Without Borders (MSF) in Spain is fighting against the precariousness of the fundraising staff. MSF has been including harsh clauses in their contracts and also has been discriminating against migrant workers.

The fund-raising staff are subjected to punitive clauses of performance. They ask the workers to achieve an unreasonable amount of new subscriptions. 80% of the staff have to face disciplinary actions monthly for not achieving the target imposed by MSF. Lots of these disciplinary actions have ended  in redundancies. Just in Galicia (Northwest of Spain) the company has sacked more than 240 staff in the last two years.

MSF has also discriminated against two foreign workers. The company had to change the contracts of every worker in 2014. As the company was using temporary contracts in an illegal way, it was forced to change everyone to permanent contracts. Everyone except two foreign workers. The company argued to these workers "you are not going to use the contract with MSF for residency in Spain" or "did not make them permanent contract for prudence".

The workers are not going to accept more injustices, abuses, discrimination and union repression.

We are going to remember that anarcho-syndicalism, too, has no borders.