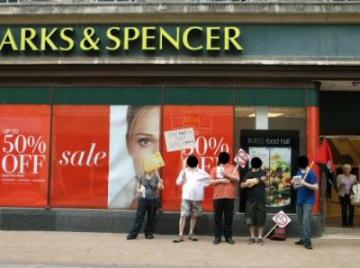 Hull SolFed held another anti-workfare ‘demo’ on Saturday the 20th, this time a mobile one. Based on suggestions on the Boycott Workfare website, we held a walk a shame through hull town center, stopping at nine different workfare providers, forming a picket outside each store, handing out leaflets and talking to shoppers. We also had some musical accompaniment, which helped to draw attention to the picket and kept the day more interesting.

Two particular incidents are worth noting from the walk of shame. Firstly, when holding our picket outside Discount UK, we were confronted by one the shop’s managers. She was immediately confrontational, attempting to get us removed by calling Humberside police, at one point seemingly trying to argue with shoppers who had listened to our picket, and finally attempting to photograph those on the picket, in her words ‘to pass on to head office’. Of course, the only thing this really seemed to achieve (aside from increasing her blood pressure) was that Hull SF spent twice as long outside the shop than we originally intended to.

The second incident was one of Humberside police’s community support teams following up on the complaint made by the manager. The usual routine of subtle and not so subtle intelligence gathering took place, however at one point the police did threaten to arrest us if they got more complaints. When questioned as for what, their answers fell somewhat short of being believable, claiming i) it’d be for our safety and that ii) it’d be for obstruction of the highway or ‘something’. They eventually left us alone, and again, their presence seemed to draw more attention to the picket.

All in all, it was a good day. The new tactic seems to work and we continued to turn shoppers away. Hopefully Hull SF can keep up these regular actions in the future.

This article was published on 26 July 2013 by the SolFed group in Hull. Other recent articles: