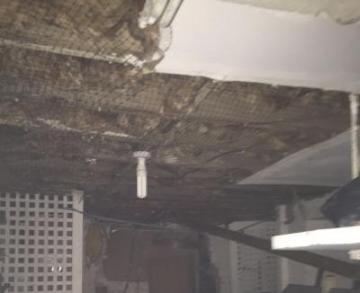 For the past three months, Brighton Solidarity Federation has been organising with a tenant whose flat is in a serious state of disrepair, in order to try and get these repair works done. What follows is an account of the council's systematic failure to fulfil their duties toward this tenant.

When SolFed first became involved in this tenant's case, we were surprised that the council had allowed the flat to fall into such disrepair. In this case, the tenancy is what is known as a 'sitting tenancy', meaning that it predates the 1988 Housing
Act. In principle this offers the tenant more legal protection than most. Most importantly for this case, the tenancy agreement obliges the landlord to carry out repairs and maintenance on the property as required. Because the building is Grade Two Listed, the council is also obliged to make sure it is well-maintained by its owner. Over the last few years, the landlord and the council have continually failed to meet these obligations, leaving the flat in a state of serious disrepair.

The disrepair issues include cracked and damaged window-frames; severe structural damp and mould issues, particularly in the downstairs rooms; and a series of botched, half-hearted repair attempts in the kitchen and bathroom. The bathroom is a particular problem. The (damp) floor has been partially re-covered in a way that makes it uneven and difficult to walk on. The tenant is visually-impaired and has injured themselves by falling several times in this room.

Given that according to its website, the council’s Private Sector Housing Team “works towards warm, safe healthy homes for all the city's homeowners and private tenants”, we decided to contact them about these problems in the first instance. They passed us on to a part-time housing and environemntal health officer who had (apparently) dealt with the case in the past, Martin Keane, although the extent of his dealings was apparent in the ongoing failure to carry out the repairs. We tried to call him to ask what the council would be doing about these issues, but he didn’t answer.

We then contacted the agency and informed them of the tenant's involvement with SolFed. Following this, a surveyor hired by the agency visited the house, but his report on the works needed did not arrive for several weeks. As time dragged on and we failed to get an appropriate response from either the council or the letting agent, we decided to meet with Mr Keane in person, hoping that he would explain his role in dealing with the tenant's case. In addition to the council's obligations to tenants, we also chose to pressure the council with regard to these issues because the agency is based outside of Brighton, which has limited our capacity to take action against them. We also wanted to raise the possibility of the council placing a disrepair notice on the flat, which would legally compel the landlord to carry out the repair works.

Mr Keane consistently failed to respond to our requests for a meeting. As a result of this, we took direct action to force the issue. Armed with informational fliers about the dispute, several SolFed members went to the council offices in support of the tenant, to demand a meeting with Mr Keane. He came down to the foyer to meet us, along with his boss, Senior Environmental Health Officer Shaun Duchossoy. Mr Keane and Mr Duchossoy were belligerent and obfuscatory, but they eventually agreed to request a copy of the surveyor’s report from the agency, as well as to provide us with a history of works carried out on the flat as a result of council intervention. This was on the 28th February 2017.

Direct action got the goods - the surveyor's report was with us within days, builders have subsequently visited the property to quote for the work, and the necessary arrangements are being made for the work to take place.

Since then, however, we have only spoken once to Mr Keane on the phone, when he refused to fulfil his promise to provide historical evidence of previous works. Fundamentally, he’s shown a serious lack of regard for the severity of the tenant’s sitation and the dangerous levels of disrepair in the property, offering no support, oversight, or enforcement of the repair process proposed by the surveyor's report.

On 7th April 2017, the tenant sent an official complaint to Brighton & Hove City Council, outlining Mr Keane's neglectful conduct and demanding that he provide the promised history of previous repairs. The council claims to deal with complaints within ten working days. So far, we have not had a response, nor have we heard from Mr Keane or Mr Duchossoy.

This is indicative of Mr Keane's, Mr Duchossoy's, and the council's systematic neglect of the health and safety of a disabled tenant. More broadly, it indicates Brighton & Hove City Council’s systematic and pathological failure to defend the rights, well-being and safety of private tenants, in a city where the vast majority of people live in rented homes.

This article was published on 11 May 2017 by the SolFed group in Brighton. Other recent articles: