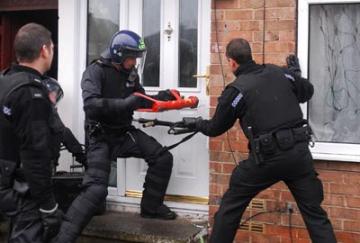 Leaflet produced for a demo against the BNP launching a local branch in December 2008.

The BNP believe in much of the worst in society. Thugs in uniform kicking down immigrants doors at dawn and forcing them into detention camps without trial. Attacks on the organised working class. Playing one racial community against the other. Christian fundamentalist bigots in charge of communities. Destroying social institutions such as the NHS. These are some of the dreams of the BNP. They are also new Labour policy, and currently ongoing before our eyes.

The BNP merely represent the logical extreme of all the mainstream parties, as they compete against each other to be the most anti immigration, the hardest on the unions, the toughest on “waste” in the public sector. For these parties, the BNP become convenient pantomime villains – “Nazis” whose policies are completely alien to their own. No matter how much they in fact coincide.

The growth of the BNP is a direct result of the policies of New Labour – or the policies proposed by the Tories or Lib Dems. In a “race to the centre” huge working class communities have been abandoned by these parties. At the same time, money is parcelled out to different imaginary, homogenous ‘communities’ on a racial basis, under the control of ‘community leaders’ – who supposedly represent this entire community and repay this with votes. This corrupts the great lived experience many of us have with multiculturalism, into something repellent – official state ‘multiculturalism’ which explicitly divides people on the basis of race, and gives out money and favours on the basis of a series of different ‘communities’ who need representing. In these circumstances is it any surprise that some of the most dispossessed in society see this, see the BNP and believe they will represent the ‘white community’? Of course, such a racial community is a sham – just as much as any other. These are people with the same very real problems that most of us face – lack of decent housing, no or terrible jobs, lack of community facilities and lack of security in the future. The BNP help reduce them to squabbling over who gets the biggest slice of the pie – the real issue is that ordinary peoples slice of the pie continues to shrink as the rich-poor divide grows.

Against the pantomime villains, and the real ones!

The threat of the BNP isn’t that they will recreate the holocaust (they wouldn’t) or seize power and destroy democracy (they never will), but that they represent the culmination the same official policy that has left our communities divided and in tatters. It will push a minority of resentful angry people down the stupid zero-sum-game of racial politics, and away from politics which could serve to find real solutions to these problems. The real problem is not that one community or another gets too much, or that one race is underrepresented - but that communities are divided up by race in the first place!

Of course it is vital to stop the advances BNP, but for as long as dividing people up on racial grounds remains official policy, there will always be fertile ground for the likes of the BNP to grow.

This article was published on 2 December 2008 by the SolFed group in Brighton. Other recent articles: