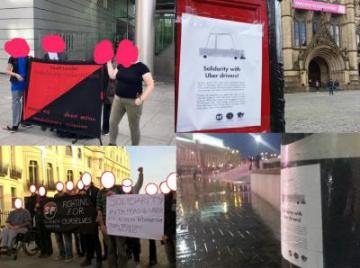 Solfed locals have taken solidarity action to express our support of Uber drivers in Jakarta taking strike action today 11.9.2017. Similar actions have been taken by anarcho-syndicalists on 4 continents as a result of a call by the IWA-AIT. Solfed members in London held a picket outside Uber's UK headquarters in Aldgate. Brighton Solfed had previously expressed their solidarity while members in Liverpool and Manchester have been spreading the word about the struggle of Uber workers in Indonesia in a flyposting campaign.  Uber drivers, organising with the anarcho-syndicalist PPAS, are taking strike action, demanding higher pay and an end to highly casualised working conditions. These are the same problems faced by Uber drivers across the world - our solidarity is as international as their capital!

Drivers around the world have protested against UberExploitation. In Indonesia, drivers organized in KUMAN, along with comrades from PPAS, have organized protests and a strike against the bad working conditions and more protests and strike actions are being planned.

On August 19, hundreds of drivers went on strike. A few hundred rallied at the Uber office in Jakarta while drivers in some other cities also joined in by turning off their apps and not taking any jobs. KUMAN sent a list of demands to Uber, concerning pay and conditions and met with the company, which did not allow it to bring legal representation. Among the demands are raised rates and not forcing the drivers to take free fares as part of Uber promos.

While Uber drivers are struggling to survive on the lousy rates, other drivers across the country have also been hard hit by Uber's practices, which drive down rates in the whole industry. Tens of thousands of drivers protested against Uber in 2016.

PPAS, an anarchosyndicalist organization in Indonesia says that international solidarity would be welcome and the ASF, the Australian section of the IWA will be holding actions around Australia on September 9.

If you would like to support the drivers, you can do so by:

This article was published on 11 September 2017 by the SolFed group in Brighton. Other recent articles: