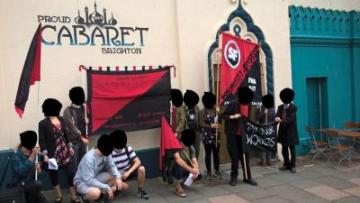 Brighton Proud Cabaret have paid a worker over £1,500 in underpaid back wages after being delivered a demand letter by Brighton SolFed.

The worker had been told that they would be paid at a rate of £8.50 per hour, but was only paid £7.58 per hour until the new minimum wage was introduced in April 2018, when the hourly rate was increased to £7.83. The contract issued to the worker by Proud Cabaret did not contain any information on rates of pay, which of course is a legal requirement.

The worker repeatedly raised this issue to management with no success. Tired of being fobbed off they contacted SolFed and after we delivered a demand letter the bosses decided to pay up!

As long-time followers of our activity may be aware, this is not the first time that Proud Cabaret has failed to pay its workers. In 2015, a worker who quit after being pressured to work whilst sick organised with Brighton SolFed to try and reclaim unpaid holiday entitlement and pay for their notice period. This campaign ended when Proud agreed to give back part of the money owed, which the worker decided to accept.

Having already had a taste of what it’s like when their workers organise against them it is not surprising that Proud agreed to pay in full before our public campaign had even started. In an interesting coincidence, Proud decided to raise pay across the board and ensure all staff members had contracts shortly after receiving the demand letter from Solfed.

Our victories don't exist in isolation; each win stands on the shoulders of the win before, and reaches to the next worker seeking to improve their conditions. This is a huge victory and demonstrates the culture of solidarity SolFed has created in Brighton through consistent organising and consistent wins!

Trouble with your boss? Get in touch via email at brighton@solfed.org.uk

This article was published on 21 August 2018 by the SolFed group in Brighton. Other recent articles: