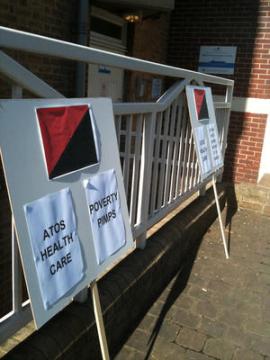 This morning we got together with local benefits campaigners to picket ATOS Healthcare, the private company paid millions by the government to force people off sickness benefits by reclassifying them as 'fit for work'. They do this by using an automated system to over-ride the judgement human doctors, as part of the wider attacks on claimants and workers, which began under Labour and are currently being accellerated by the coalition government. Below is the text of the leaflet we distributed to passers-by, many of whom stopped to share experiences of friends and loved ones who've had their benefits cut arbitrarily.

ATOS Healthcare: Poverty pimps putting profit before the welfare of people with disabilities

ATOS Origin is an international IT corporation. It is France’s second largest and Europe’s third largest company. In the UK ATOS Healthcare has been awarded the Department of Work and Pensions contract (estimated at £300 million) for conducting ESA medical examinations termed as ‘work capability assessments’.

ESA or Employment Support Allowance was introduced in October 2008 to replace Incapacity Benefit and since this date all claimants assessed as incapable of work are awarded ESA. Claimants in receipt of ESA were originally assessed in order to receive the benefit and their claims were supported by evidence supplied by qualified healthcare professionals such as GPs and care workers.

ATOS ‘work capability assessments’ are made via a computer program operated by ‘health care professionals’ who don’t necessarily have working knowledge of individual claimants’ disabilities, in effect a qualified physiotherapist could be assessing a claimant with severe mental health disabilities. Computer-generated medical reports are recorded on the LiMA program (Logic Integrated Medical Assessment) and claimants are confronted by a mechanical process that often isn’t capable of recording the claimant’s own insight into their disability, developed over time and through regular contact with GP’s and care workers.

ATOS Medical assessments can last in excess of 2 hours and claimants – who often have been diagnosed with chronic stress and anxiety – are reported to have found them confusing, humiliating and invasive. ‘This testing system has already led to people with terminal illnesses and severe medical conditions being declared fit for work and having benefits cut. GP’s are ignored in favour of decisions made by Atos Origin’s computer’ (False Economy website). ATOS Healthcare ‘work capability assessments’ are designed to strip benefits from as many people as possible – which is why the government are happy to pay them many hundreds of millions.

This article was published on 10 May 2011 by the SolFed group in Brighton. Other recent articles: