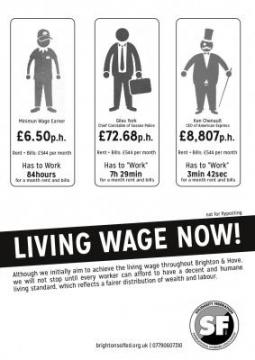 The ‘living wage’ is an annual estimation of the average wage needed to cover in a realistic way the expenses of a person living in the UK. It is also a demand made by different unions and civil organizations in the UK and sets the ‘subsistence salary’ at £7.85 per hour (except for London, where the ‘living wage’ is £9.15 per hour).

The situation for UK workers is getting more and more problematic; official statistics show that the number of people who are getting the minimun wage is increasing, as are the number of workers paid under the minimun. A situation that is particularly desperate in certain areas of our city, since wage theft (through unpaid holidays or hours) is becoming a common dynamic; a problem not only caused by corporate greed but also by workers’ disempowerment, passivity and conformism.

This explains why Brighton Solfed, have decided to add the ‘living wage’ (or ‘subsistence wage’ as we call it) to our labour demands, although we want to distance ourselves from the ‘official’ campaign that has been supported in some political, business and pseudo-union sectors in the UK. We could never share the optimism of those who just want to give us the leftovers.

We’re aware that the campaign has some limitations; for example, that the ‘living wage’ estimation includes in the national average cities like Brighton, Oxford and Bristol, even though they have a higher cost of living. We think it would be interesting to include more than two categories so that they can adjust to each different areas´ realities, something that unfortunately has only happened in London.

Also, the “official campaign” boasts that it´s trying to achieve equal pay, not mentioning that one of the main problems in this sense is the high prevalence of women with part-time contracts and lower-paid jobs, a consequence not so much of economics but rather of the problem of social attitudes towards gender equality.

For us, the ‘living wage’ is not meant as a proposal to increase productivity or to clean up the image of companies; neither is it about a dream of reaching a more dignified status within a system of misery. It is definitely not about creating more salary categories or about increasing the salary gap between different work sectors and positions.

It is, rather, about exposing the foundations of inequality that labour relations are based on. It is about no longer assuming the role we have been given by macroeconomic data, and not playing into the hands of our bosses (those who do the least work and are paid the most). It is about collectively assuming the responsability that we will only reach an equitable distribution of resources if we are the ones who fight for it.

This article was published on 27 July 2015 by the SolFed group in Brighton. Other recent articles: