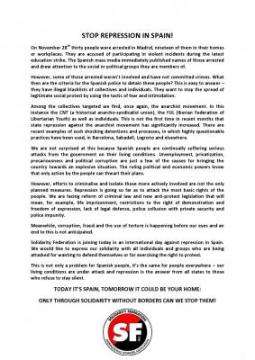 Brighton Solidarity Federation are calling for a day of solidarity with comrades in Spain currently suffering detention and harassment by the state. We'll be unfurling a banner and distributing propaganda about the situation which has reached critical levels for both the anarchist movement and the Spanish people. We are also calling for a communications blockade of the Spanish embassy and consulate in London (details of stall and blockade below). From our leaflet:

On November 28th thirty people were arrested in Madrid, nineteen of them in their homes or workplaces. They are accused of participating in violent incidents during the latest education strike. The Spanish mass media immediately published names of those arrested and drew attention to the social or political groups they are members of.
However, some of those arrested weren’t involved and have not committed crimes. What then are the criteria for the Spanish police to detain these people? This is easy to answer – they have illegal blacklists of collectives and individuals. They want to stop the spread of legitimate social protest by using the tactic of fear and intimidation.
Among the collectives targeted we find, once again, the anarchist movement. In this instance the CNT (a historical anarcho-syndicalist union), the FIJL (Iberian Federation of Libertarian Youth) as well as individuals. This is not the first time in recent months that state repression against the anarchist movement has significantly increased. There are recent examples of such shocking detentions and processes, in which highly questionable practices have been used, in Barcelona, Sabadell, Logroṅo and elsewhere.
We are not surprised at this because Spanish people are continually suffering serious attacks from the government on their living conditions. Unemployment, privatization, precariousness and political corruption are just a few of the causes for bringing the country towards an explosive situation. The ruling political and economic powers know that only action by the people can thwart their plans.
However, efforts to criminalise and isolate those more actively involved are not the only planned measures. Repression is going so far as to attack the most basic rights of the people. We are facing reform of criminal law and new anti-protest legislation that will mean, for example, life imprisonment, restrictions to the right of demonstration and freedom of expression, lack of legal defence, police collusion with private security and police impunity.
Meanwhile, corruption, fraud and the use of torture is happening before our eyes and an end to this is not anticipated.

Also on Friday December 27 please send the attached text, or call to register your opposition, to:

TODAY IT’S SPAIN, TOMORROW IT COULD BE YOUR HOME:
ONLY THROUGH SOLIDARITY WITHOUT BORDERS CAN WE STOP THEM!

This article was published on 25 December 2013 by the SolFed group in Brighton. Other recent articles: