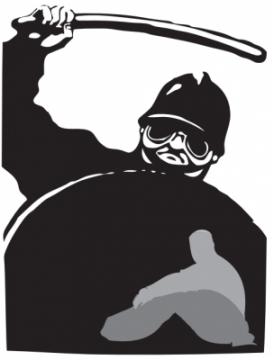 Recently, Richard Siggs, a Police Sergeant from Brighton, has been communicating with several charity agencies. In the text, he explains his concern about the “intolerable level” the numbers of “very visible members of the Street Community” have reached in the streets of Brighton, and he asks the agencies to reinforce these three ideas while dealing with their clients:

"Brighton & Hove do not accept rough sleeping to be a valid life choice, it is dangerous and based on chaotic life style"
"There is nowhere in Brighton & Hove to street drink, would you like us to refer you to support for your addiction?"
"Any property left laying around on the streets will be removed by the local authority and may be destroyed"

We consider this to be unacceptable for several reasons. Firstly, it is trying to criminalize homeless people by pointing to them as the “problem”; secondly, in stating that homelessness is an unacceptable way of life, it takes for granted that it is a choice; therefore it ignores all the circumstances behind a person ending up in the street. As a general interpretation, we think that besides the “condescending” tone lies a very intolerant message: that homeless people are going to be harassed and their property is going to be taken from them.

This way, they are stigmatizing every person or activity which does not match with their capitalist model. They are not acting according to the people’s interest, but trying to maintain a “clean” city for tourism in the interests of bosses and the wealthy.

In a social context in which we all have to deal with precariousness and housing problems, where mental health services are being cut, it’s absolutely unfair to point at the homeless people as the enemies. They are not the enemy. Most of them have life styles imposed by social context, precariousness, etc. Capitalism keeps on leading more and more people to poverty and marginality and the response of the police and the council is more repression.

The message from SolFed and the Health and Social Care Network is this: we will not become accomplices in this repression.

Don’t not be part of it yourselves. Homeless people are not your enemies: bosses and the state are.
Don’t look the other way!

This article was published on 18 April 2015 by the SolFed group in Brighton. Other recent articles: