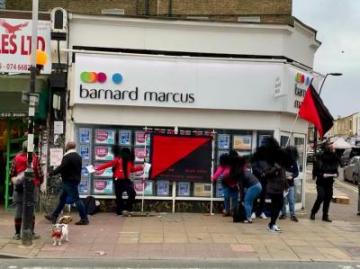 Here is another quick update about our ongoing public campaign in support of a group of tenants demanding compensation from Fox & Sons for having had their tenancy withdrawn 5 days after their move-in date [link 1; link 2; link 3].

After the success of our triple picket staged on 1st December, last Saturday 8th December we escalated our dispute by simultaneously picketing not only 3 Fox & Sons' branches in Brighton & Hove (Kemptown, Hove, Elm Grove) but also one branch of their sister company in Peckham (London), Barnard Marcus. The two firms are amongst many others owned by real estate mega-company Connells Group. All pickets were again well attended and, unsurprisingly, we received again a lot of support by people passing by, some of whom have since been in touch to share their frustration and experiences with the agency – and of course with the housing situation in Brighton as a whole.

Fox & Sons seem to have finally understood that employing police force as some kind of private security service is not the best way of responding to people protesting against their dodgy practices. However, this does not mean that they have decided to engage in meaningful negotiations with their dissatisfied clients. Rather, they have been experimenting with some goofy forms of counterinsurgency – obviously with disastrous results. While the agency has received a flood of negative reviews from members of the public that were informed of the situation, Fox & Sons' senior branch manager for the Hove shop, Drew Bailey, has written a glowing review to his own company! As you can see in the screenshots below, Bailey used the same account to comment on Fox & Sons' "fantastic service" as well as to thank reviewers for their appreciation of his and his team's "work". Additionally, while bragging about their "professionalism", they have tried to spam our email account by making enquiries to other letting agencies on our behalf. This would almost be funny, if we weren't talking about a company responding to a campaign about their systematic indifference toward their tenants, resulting in a group of people ending up homeless.

This article was published on 12 December 2018 by the SolFed group in Brighton. Other recent articles: