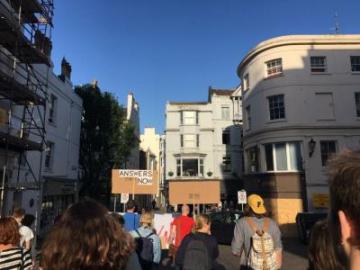 UPDATE: since the publication of this article on the afternoon of Monday 10th July 2017, Larissa Reed, Executive Director for Neighbourhoods, Communities & Housing at Brighton council has been in touch to arrange a meeting with Brighton SolFed and the Bobby Carver campaign within the next two weeks. We look forward to hearing how the issues raised below are going to be addressed, and about the changes the council is going to put in place to ensure 'the safest homes possible' for everyone...

On Friday 16th June, along with Brighton Sisters Uncut, Brighton Solidarity Federation organised a solidarity demo and fundraiser for the residents of Grenfell tower. We did this to show solidarity, to draw attention to the continuity between the practices of Kensington & Chelsea council with those of Brighton, and to try and raise some money for the residents. The demo heard from a number of tenants in Brighton being neglected by the council. These included Bobby Carver - who is paraplegic and who is currently housed in an attic flat - and his campaign. They explained that since 2012, Bobby's housing situation has been shaped by a series of shocking decisions by council officers systematically ignoring or overruling professional and medical opinion advising that his home is unsafe. Council officials have also lost documents, delayed decisions, and persisted in offering alternative accommodation deemed unsafe by medical professionals. As a result, Bobby is stuck in an attic flat which fire services described during an inspection as "a death trap".

The demo also heard from Brighton SolFed member Steve, a severely visually impaired tenant who has epilepsy and memory loss. He explained that his flat is structurally damp, hazardous, and dilapidated. Since this was reported to the council in early 2016, the Private Sector Housing team has: not visited his flat to undertake an assessment of it; changed their version of events when challenged; left him to negotiate a complex situation regarding these now planned renovations (which are only in place because of the efforts of his organising), with the council offering no oversight of this process to ensure that he receives the appropriate legal protections.

Members of Brighton Benefits Campaign and Brighton Migrant Solidarity also spoke about the housing situation for claimants and migrants in Brighton, and a statement was read out from the Fire Brigade Union. There was a militant mood at the demo, despite attempts by the newly-elected Labour MP for Kemptown, Lloyd Russell-Moyle, to try and pin decades of State neglect and violence on 'Tory cuts'. Perhaps he should have listened a little more closely to the stories of what Brighton's Labour council has been doing to its residents.

Following the demo and fundraiser, on Monday 26th June, Brighton SolFed delivered leaflets to a number of high rise blocks in the city, offering our solidarity and support to any tenants who might be organising to ensure their safety as a result of the fire at Grenfell.

The following day, we received an angry email from Larissa Reed, Executive Director for Neighbourhoods, Communities & Housing at Brighton council - who earns upwards of £100,000 a year - informing us that our leaflets were inaccurate. This, Ms Reed said, was because since Grenfell, the council had decided to speed up the installation of sprinklers in council-owned tower blocks in the city, which was previously going to take until at least 2025.

We replied to say that this is the minimum that the council should be doing. We also pointed out that Brighton council has been systematically neglecting its most vulnerable tenants for a while now, as in the cases mentioned earlier. We know there are many, many more stories like this.

Ms Reed assured us that she wants to 'ensure we have the safest homes possible' for all, that 'concerns are heard and acted upon', and that she would be 'happy' to meet 'face to face'. OK then, we said; meet with Bobby and with Steve, hear about the hell that the council has put them through, and do something about it. Do something not only to fix their situations, but to ensure that Brighton council no longer places or leaves any tenant in dangerous housing.

We haven't heard from her since then. It would appear - predictably - that what upset the council was not that we had not included the (as far as we're aware, not yet widely publicly known) plan to speed up the fitting of sprinklers. What upset them - and what continues to upset them - is tenants and organisations in solidarity with those tenants drawing attention to their neglectful practices and placing pressure on them to stop these, and to start making our homes safe.

This article was published on 10 July 2017 by the SolFed group in Brighton. Other recent articles: