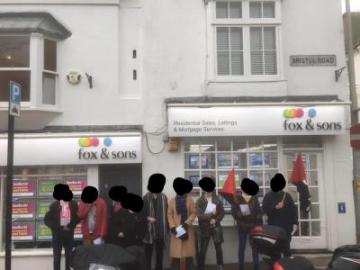 Brighton SolFed’s public campaign against Fox & Sons has now been extended to their parent company, Skipton Building Society. With Fox & Sons still refusing to compensate the six tenants whose tenancy they cancelled five days after it was supposed to start, leaving them with nowhere to live, we contacted David Cutter, the chief executive of Skipton, and Gary Morton of their lettings branch Connells, to demand that they resolve the issue. Both Mr Cutter and Mr Morton refused to do so, meaning that we are today (Saturday 19th January) extending our campaign to pickets of Skipton branches across the country. This follows an initial picket of Skipton by Manchester SolFed last Saturday 12th January.

According to their latest financial accounts, Skipton Building Society made a profit of £200.1 million in 2017, and they have a total asset portfolio worth a staggering £21 billion. They boast that in 2017 they “enabled more people to save for their future and finance their own home than we ever have before”, and their estate agency team, Connells, made profits of £104.2 million in the same period. Their chief executive David Cutter was paid £1,012,000 last year, and is in line for a pension worth around £90,000 annually.

Notably, some of Skipton’s profits have come from their specialist off-shore bank, Skipton International, set up to make it easier for off-shore, buy-to-let landlords to purchase properties in the UK and rent them out to tenants.

Given this clear commitment to helping landlords fleece tenants, it is no surprise that Skipton have also refused to compensate the tenants affected. Indeed, Gary Morton informed us that the £720 compensation paid by the landlord to Fox & Sons, which was originally intended for the tenants ,has now been returned to the landlord, rather than passed on to the six people left homeless by Fox & Sons' ineptitude. It is clearly apparent that Skipton care far more about the profits of property owners than the wellbeing of tenants.

While £2280 may seem like small change to an organisation with £200 million in the bank and billions of pounds of assets, it is a significant amount of money to tenants forced to rent a property at short notice in one of the most expensive cities in the UK. We demand that one of Skipton, Connell or Fox & Sons compensate these six tenants for the additional rent they were forced to pay when finding a new property after their planned move fell through with no warning from Fox & Sons.

Until they do so, our public campaign will continue, extended to pickets of Skipton Building Society and their letting agency subsidiary Connells.

Having trouble with Fox & Sons, or any other Connells agencies? You can get in touch with us at: housing@brightonsolfed.org.uk, or by texting 07427239960.

This article was published on 19 January 2019 by the SolFed group in Brighton. Other recent articles: