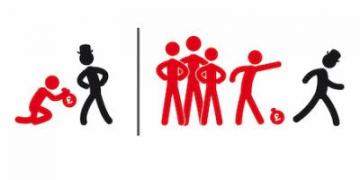 In September-October 2017, Brighton SolFed Housing Union successfully organised with a tenant who was facing a £510 deduction to her deposit. The amount was repaid in full after a roughly three week campaign. Below, the tenant explains the situation she was in, as well as her experience of the campaign and the affect it had on her.

My tenancy had been stressful throughout. My children were present when the landlord came into our garden to find us and told me in front of them that I had to leave, activating a six-month break clause in the contract even though I had been assured this wouldn’t happen. Following this, I tried asking the agency politely and promptly if we could reach a compromise, as one of my children would be three days away from their final GCSE exam on the day they wanted me out. I also tried reminding them (it wasn't news, they were aware already) that my health was affected by a long-term condition. They weren’t particularly cooperative, and I had to arrange to leave the house during a very difficult time.

When I came to SolFed for support with the way I had been mistreated, I had already tried taking legal advice, as well as trying to negotiate with the agency through a national advice organisation. None of those had worked, and my health had rapidly got worse. After I moved out, the agency was trying to deduct £510 from my deposit for cleaning costs and to replace a lock. I had the house professionally cleaned before I left, which I had a receipt for, and I hadn’t broken any locks.

From the first time I got in touch with SolFed, I felt that things were working in a different, better way than any other attempts I had made to resolve the matter. The campaign put me at the centre of finding a resolution that worked for me and my family. They were always available to contact and were very flexible about meeting times and venues to meet my health and mobility needs.

The dispute began after the agency did not respond with an offer to a letter demanding the full return of my deposit. We began the campaign with a picket of the shop in late September 2017, which they clearly didn’t like, though at first, they responded by making legal threats, rather than trying to negotiate. We weren’t going to back down, so we made these threats public and continued the campaign with further pickets. They returned my deposit in full in just under three weeks from the beginning of the public campaign.

I was going nuts last summer (anxiety, panic attacks, suicidal thoughts) during the whole eviction process that dragged on from April to October and left me homeless for 3 months. SolFed stood up for me and supported me in sticking it out until the agents finally gave in and paid up what they owed. My whole understanding not just of the extortion and bullying tactics of landlords and estate agents but of the social structures that prop them up went through a kind of explosion of experience. If it wasn't for SolFed and the incredible friends who told me about them and gave me space to stay on their sofas, in their tents, gardens and homes, I would have been on the streets. Direct action is the only thing that can change the crappy way things have been for too long. SolFed have shown me that the way to do successful direct action is with friends – and dignity, perseverance, imagination and a fall-over laughing sense of humour.  I'm happy to say that it was the whole of the campaign with SolFed that not only resolved the issue, but also kept me going through a traumatic time in my life.

Trouble with your landlord or letting agency or want to get involved in Brighton SolFed Housing Union? You can get in touch in the following ways:

This article was published on 25 June 2018 by the SolFed group in Brighton. Other recent articles: