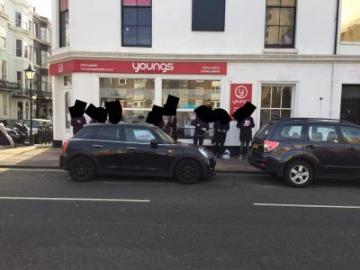 Along with the tenants, Brighton SolFed wrote to Youngs on 20th November, explaining the issues and outlining options for redress. Youngs chose to ignore this letter and, despite a further contact from SolFed and the tenants highlighting the demands, the two-week deadline for their response passed. Consequently, along with the tenants, Brighton SolFed has begun a public dispute with Youngs. This began with a picket outside the branch at 4pm on Monday 4th December. Many members of the public showed solidarity with the picket. Indeed, another Youngs tenant has since been in contact to explain details of their own grievance with the agency and several others shared similar stories of their past issues with Youngs.

With the support of Brighton SolFed, one tenant is demanding £6,900 in compensation for the stress caused by the unsafe conditions in the property, as well as for the failure of the agency to protect their deposit. This tenant had to swap rooms with their children, as the conditions in the children's bedroom were making them ill. After the tenant arranged their own survey of the property, the landlords admitted there were structural damp problems, but said they would not spend money to address them. On top of this, the tenant was told that their deposit had been lost by the agency.

A second tenant had their health problems exacerbated by a property which has had numerous, long-standing problems: these include the bedroom being inaccessible for several months due to extreme black mould; damp due to poor construction work outside the property; and a ceiling collapse due to these structural problems. Many of these problems the tenant has had to remedy themselves, while the agency dithered or simply did not recognise the scale of the danger to the tenant's health. Other serious issues are still to be attended to and the tenant is demanding for the agency to do this urgently and to industry standard. Additionally the tenant is demanding  £5,500 in compensation for having lived in serious damp conditions while the agency continuously failed to respond adequately to their communications.

Youngs have ignored these problems until now, which means the dispute has been taken to the streets by the tenants and Brighton SolFed. The solidarity we have been shown already goes to demonstrate that agencies cannot treat tenants like this, and testifies to the widespread and increasing frustration on the part of tenants in Brighton and beyond. Recognising how our problems are often shared by many others can grant us real power to fight back against the appalling neglect that threatens the safe and peaceful enjoyment of our tenancies. Through solidarity and direct action, ordinary people have the power to improve their lives.

This article was published on 16 December 2017 by the SolFed group in Brighton. Other recent articles: