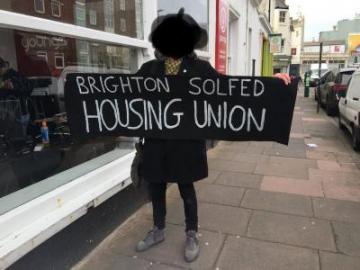 Brighton Solfed is supporting two tenants who have been organising in regards to structural damp, presence of severe black mould and overall dilapidation issues dangerous to the tenants' health. These two separate properties are managed by Youngs. Both tenants are demanding compensation for such issues and one of them, who is still living in the property, is urgently requesting that a number of neglected and still unresolved problems are attended to by the agency. This tenant, on raising these concerns with Youngs' manager David Pay and the landlord Stephen Mitchell, was served with a Section 21 notice of eviction.

The demonstration marched up St James' Street on saturday morning, with fellow tenants working in solidarity to show that the revenge eviction and continued failure to address the demands of tenants are unacceptable. We arrived at Youngs' at 11am, and for the next hour spoke to members of the public who showed support for the campaign.

The response from David Pay of Youngs included denigrating the tenant and shaming those who claim housing benefit, saying the tenant "never worked a day in his life." In response to the restatement of the demands for repairs, Youngs called the police. Evidently the concerns of tenants to make their homes safe places to live are not important to the agency, or the landlord.

Youngs have already missed a deadline to respond to the tenants' concerns and are utterly failing to acknowledge the magnitude of the problem. The mismanagement of deposit funds, encroaching mould which has caused and exacerbated illness, and collapsing ceilings are just some of the major problems inadequately addressed by the agency. They are choosing arrogantly to ignore the fact that their management has led to tenants living in conditions which are severely dangerous to their health. As such, the public campaign is intensifying.

There has already been mass-media interest in the dispute, especially the conduct of Youngs. Tenants have had contact with a BBC documentary team who are working to highlight the crisis in housing. Other Youngs tenants are coming forward to share their stories, to show that this is not an isolated problem.

The tenants are open to an amicable resolution to the dispute, yet Youngs and the landlord continue to treat these issues as something to be swept under the rug, and have yet to make any offer of compensation. If you want to show Youngs that their response is unacceptable, you can email david@youngsbrighton.com and attend the next demonstration on Saturday 27th January at 10.30am meeting at the corner of Manchester Street and St James's Street.

This article was published on 20 January 2018 by the SolFed group in Brighton. Other recent articles: