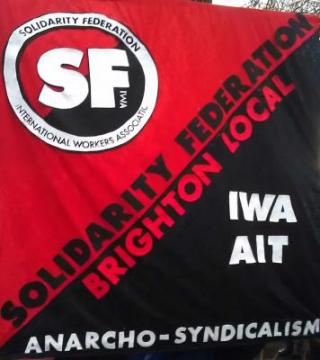 Summertime is proving to be a period of intense activity for Brighton-SolFed. We are constantly being contacted by hospitality workers who endure, amongst other forms of exploitation, wage and holiday theft. In some cases actions have followed suit given the impunity under which some employers operate in the city. Below are some brief notes on two of our most recent achievements.

A few weeks ago we were contacted by a worker who told us that his employer - a multinacional cleaning service provider - owed him about 150 hours in unpaid wages and holidays. The worker, who was employed as a cleaner at a local supermarket, detected several mistakes in his wages and realised that 150 hours worth of holidays and worked hours were missing. The fact that this was a part-time, low-paid job made the situation for the worker quite difficult, as he depended solely on this job to make ends meet. Due to the precarious circumstances in which the worker found himself, we agreed with him not to take actions under the name of SolFed to start with. The company would probably take reprisals against the worker and he could not afford to lose his job. We assisted the worker with related calculations, letter-writing and contacting his employer. After a long wait, the worker was finally paid what he was owned.

In another case, a worker from a multinational fast food restaurant operating in central Brighton, was fired after going on a company-sanctioned holiday break - or as the company puts it: had her working hours reduced to zero. This 'virtual' firing of the worker was made worse by the fact that the worker was still owned unpaid wages and holidays.

The worker approached us and presented her case in our drop-in session, and Brighton-SolFed decided to shoulder the dispute. Having left the job, the demand was for outstanding wages, unpaid holidays and a week of notice pay - although we knew that her zero-hour contract did not entitled her to it, we still thought of giving it a go, as she never received a copy of her contract of employment and we could argue otherwise.

As we constantly pointed out, those exploitative practices are widely spread in Brighton. These small victories mean a lot to us, because they prove that Brighton-SolFed has consolidated a highly effective approach against the impunity under which employers are allowed to operate in the city. However, we are well aware that those are just small victories achieved through negotiation instead of Direct Action.

Unfortunately, work conditions are worsening by the day in this city. Although Brighton workers still have a very long walk before being able to reverse its own enslavement, we can proudly claim that the walk has already started and it will not stop till we reach our aims.

What are you waiting for?

This article was published on 17 August 2015 by the SolFed group in Brighton. Other recent articles: