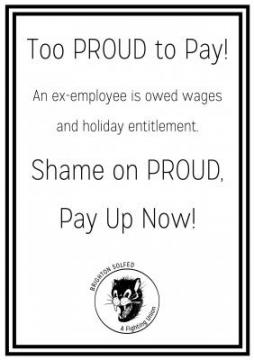 Brighton-SolFed has started a public campaign against Brighton Proud Cabaret. This place, belonging to a company which owns another two venues in London, owes a former worker part of his wages, including most of his holiday entitlement.

After seven months working as a chef, the worker finished his employment having experienced such abuses as being pressured into going back to work when he was still unwell. Now, in order to move on as soon as possible, he is willing to renounce his claims to outstanding notice pay, although, according to the way in which his employment terminated, we think this to be money that he is entitled to.
However, Proud Cabaret does not even seem willing to pay the wages owed. In our first approach to the management, in Brighton, we were told to talk to the head office in London whose contact "we could find in the Internet" as that has "nothing to do with them." Then, after more than two months, the only answer they have provided is that they are having "problems with the paperwork."

Proud Cabaret is wrong in thinking that they will get away with this and, what is more, they are wrong to suppose that it will be dealt with in a discreet manner, as benefits exploitative employers.  Brighton-SolFed is going to bring this dispute to the streets and to the knowledge of the public, showing everybody the real face of this company.

Then Brighton-SolFed calls out for a boycott of Proud Cabaret until their former worker receives what belongs to him. What is done in the dark, shall be brought to the light.

This article was published on 16 September 2015 by the SolFed group in Brighton. Other recent articles: