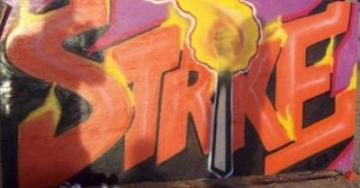 Touted by some union leaders as the largest co-ordinated union action in British history, July 10 sees millions of public sector workers from across the country on strike. During the one-day action – with the promise of more days to follow - local government workers will join teachers, civil servants, fire fighters and many others.

After years of pay freezes and below inflation pay rises (ie, pay cuts), union leaders have finally seen fit to push for action from their members, and try bolster their position at the negotiating table. This has resulted in unusually strong ballots for taking action across the unions involved. While much of the media and politicians work themselves up into a predictable fury over low turn outs - though still higher than in many local elections - and holding the country to ransom, the trade union leaders act as though they are the one thing defending their members from Tory barbarism.

For many workplace militants, all this seems bitterly familiar after the pension strikes of 2011. This saw similar numbers of workers take action - again with the promise of escalation from union leaders if their demands were not met. Yet, as so often happens, the slightest concessions from the bosses saw the unions cave in. This was because the union's position as mediators between workers and management/government was re-established - the real reason for 'militancy' from union bosses. They accepted a deal strikingly similar to that offered in the first place.

In similar fashion, the UCU (University and Colleges Union) sold their members an end to last year's pay dispute when offered a 2% pay rise this year – still below inflation, and not even for the year they had been in dispute and had taken several days strike action over!

Dave Prentis, Unison General Secretary has gone as far as suggesting that this single day of striking is larger than the 1926 general strike.

Really? 1926 represents a high point of workers struggle pushed from the grassroots. A potentially revolutionary (p3) moment, it genuinely threatened to bring the country to a standstill. A far cry from the usual token one day affair.

But there is one parallel that Prentis might have accidentally stumbled upon. In 1926, after several days of powerful strike action and running battles with scabs, the working class had begun to show who really had power in society. This terrified the TUC (Trade Union Congress), who sold their members down the river by ordering them back to work, leaving those most under attack to fight and lose alone. Perhaps it was this that Prentis had in mind.

Of course, events like this are vital as a starting point. Millions of people are taking direct action by withdrawing their labour to fight back against a government and ruling class intent of grinding us further into poverty. But it’s only that – a start. Workers have to be willing to fight for themselves if they want to reverse years of falling living standards. We can't just rely on the trade union bureaucracy, who have sold us out time and time again. Only if we force the issue and deny bosses the ability to attack us  do we stand a chance. Neither can we allow union leaders to leave us defenceless and give in with the slightest concession (or promise of a Labour Party victory).

We need to be willing to take sustained action that make it so the government is unable to ignore our demands and power.

In Brighton, we saw bin men stand up for themselves and show the way it’s done. When threatened with huge pay cuts, they took action immediately and refused to go back to work. Not for them a token day of action and a futile wait for negotiations to happen. Within just over a week, they had beaten back the council. This is how we need to do it – waiting for a bureaucrat to negotiate us a better deal just won’t cut it.

We shouldn't underestimate the importance of what public sector workers are doing on July 10. But equally we shouldn't forget the millions of largely non-unionised workers in the private sector who are struggling with low wages and insecurity.

Here in Brighton and Hove the newly organised Brighton Hospitality Workers have been taking on the bosses in a notoriously precarious sector. By taking direct control of their disputes local workers have already won back over £6000 in stolen wages and denied holiday entitlement.

This is direct action - a sustained, principled stand that doesn't allow union bureaucrats, politicians or anybody else to hijack our struggles.

(this article first appeared in Brighton Solidarity, our local newsletter)

This article was published on 9 July 2014 by the SolFed group in Brighton. Other recent articles: