This summer, Brighton Hospitality Workers (BHW) took on one of the most uncompromising bosses we have faced. The owner (who shall henceforth be referred to as ‘V’) of a well-known local café had hired a worker with an agreement to pay her £6ph but when it came to payday, he only coughed up what amounted to £5ph and refused to pay her holiday pay. After V refused to pay her the remainder, the worker approached BHW, who agreed to support her in getting back her owed wages.

During the initial meeting with V, BHW delivered a letter outlining reasons for the conflict and the demands of the worker. The worker herself was too scared to face V. V was verbally and physically abusive, and refused to accept the letter (we left it on the premises anyway).

Newcastle Local have created our own campaign website and phone number to simplify our message and become easier to find. Already regularly advising workers in distress, we hope to increase this work as well as take on further case work as we build our Local. If you or anyone you know is in dispute with a boss, or wants advice on workplace rights and fighting back, contact us via our new site www.stuffyourboss.org.uk or ring 0191 3082354. 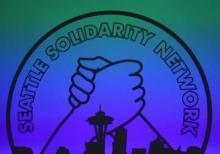 The first 45 minutes of last Thursday's talk in Brighton by a member of the Seattle Solidarity Network are now online. The talk covers the origins o SeaSol and the rationale behind it, as well as examples of their fights, their tactics and the anatomy of a typical struggle. After this, there was an hour's discussion of tactics, question and answers, and some more short films shown. We hope to edit together the lot into a video when we get the opportunity. 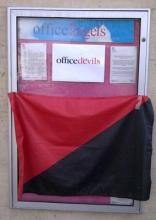 One of the most exciting developments in London over the last year is the formation of the London Coalition Against Poverty. LCAP is inspired by the Ontario Coalition Against Poverty in Canada, who have created a successful and empowering model of grassroots community organising over the last two decades. It brings together activists, advice workers and campaigning groups in order to tackle the causes and effects of poverty, merging advice work, direct action and libertarian organising.

The current “debate” about immigration focuses on economic arguments, with the bosses arguing that they need “skilled migrants” to fill gaps in the workforce. This is a partial truth, the other side of the coin is that migrant workers are also needed to do the low-status “unskilled” jobs as cleaners, security guards, agricultural labourers and workers in food processing plants which “native” workers can’t be dragooned into doing. However, the argument that immigration is “good for the economy” is not one we should adopt. “The economy” is the value of what the ruling class own, increased through our exploitation; anarcho-syndicalists reject the social democratic view that capitalism can be managed for the good of the working class.