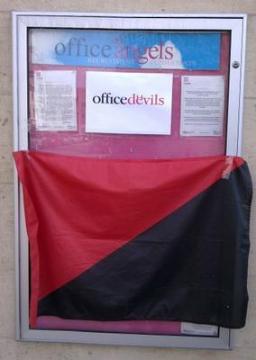 The office manager came out to see us on two occasions, the first time to ask why we were there and to ask us to remove our flag which was draped over their standing display board (which we taped to their noticeboard instead). On reading the leaflet we were distributing she insisted, not surprisingly, that they always paid their workers. We responded that if that were so, we looked forward to hearing that the person whose non payment triggered this dispute had been paid...

On the manager's second appearance (perhaps to see if we were still there) she tore down an 'OfficeDevils' sign we had taped to their board and also treated us to some verbal abuse. Sadly it was too garbled for us to catch many of the words.

With the increasing reliance of companies upon agencies mistreatment of workers is a growing issue. Workers face non payment for work, and unacceptable conditions every day. They work without sick pay or maternity leave, are vulnerable to unfair and instant dismissals and have no union support. Rising unemployment and a bleak economic climate will force even more of us to accept these precarious conditions - yet another example of working class people being exploited by an economic system that only benefits the rich.

The best way to improve our conditions at work and in our communities is by standing together and resisting. We want to hear from any current or previous Office Angels employees that have come into conflict with this company and its culture of disrespect. We know that this is not an isolated incident and the more people get involved, the more pressure we can put on the company to start treating its workers properly.  Equally, we would be happy to hear from workers who have suffered similarly at the hands of other agencies.

We will be back.

This article was published on 28 April 2011 by the SolFed group in Northampton. Other recent articles: