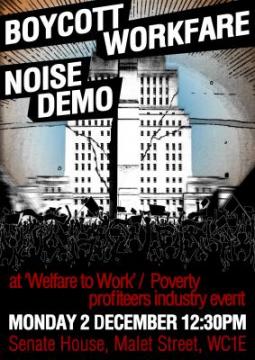 On 2nd December, those driving forced labour for unemployed people on the government's workfare schemes are getting together for their annual conference at Senate House, Malet Street, London.

ERSA, the trade body for the 'welfare to work' industry, have called their conference "Challenge and change in an evolving landscape". Those attending include Esther McVey (Minister for Employment); Stephen Timms (Shadow Minister for Employment); The Department for Work and Pensions Director of Social Justice; Chairs, Heads and Directors from workfare profiteers A4E, Avanta, Seetec, G4S, Pinnacle People, Groundwork UK, Tomorrow's People; the lead researcher from Ian Duncan Smith's thinktank, the Centre for Social Justice; and the Chief Executive of the Tax Payer's Alliance. All under one roof.

South and North London SolFed are supporting Boycott Workfare's noise demo beginning at 12.30pm. Be there to show these people that their days of vast profits for abusing the poorest people in the UK are numbered.

This article was published on 25 November 2013 by the SolFed group in South London. Other recent articles: