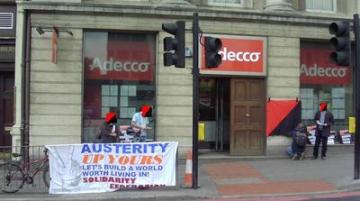 Today, the 11th of May, three London locations of Office Angels had the the pleasure of a visit by members of South & North London Solidarity Federation along with other organisational support. The pickets were part of the week-long national campaign being orchestrated by the Solidarity Federation in support of Dan, a worker who's been cheated by the Office Angels employment agency.

First up was ADECCO, Office Angel's mother company, on London Bridge. The manager was none too happy with our picket and came on a few occasions to address us in a fury.  On one of those occasions, he began throwing down placards that we had placed on his beloved private property. Another unhappy customer was a 72-year-old antagonistic Thatcherite who couldn’t comprehend the idea that individuals would give freely their time to show solidarity and support workers’ in struggle. (No surprise there, then).

Next up was the Office Angels located opposite London Bridge station. On our approach, staff moved to the back of the office.

Here there was no visit from management but good interest from the public, much like we saw at the previous ADECCO picket.

We then moved on to our final destination, the Office Angels on Oxford Street.  By now our numbers had reduced with some heading off to work and others going to the ATOS protests being held in support of claimants.  Despite that, once again there was good interest from the public with hundreds of leaflets being accepted with many stopping and offering verbal support. As it turned out, the Oxford Street “Office Devils” shares their building with a language school. Students and their lecturer, on their break, wished us good luck in getting Dan what he is rightfully owed.

Finally, an Italian anarchist who happened to be visiting London picked up leaflets to take back home, with the intent of visiting the SolFed website and ensuring his Italian comrades join the International campaign against Office Angels which is due to start next week. Lets hope it doesn’t have to come to that and Office Angels management see sense and pay Dan what is rightfully his.

This article was published on 11 May 2011 by the SolFed group in South London. Other recent articles: