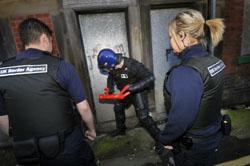 The UK Border Agency (UKBA) has been busy of late.  Following the Heathrow passports checks scandal of November last year – in which the agency was accused of ‘relaxing’ passports checks on incoming passengers from the European Economic Area, prompting convulsions of anti-immigrant rage across the political and media spectra – the UKBA has invested its time in presenting an image of a robust, strong and uncompromising deportation specialists.

Central to its efforts towards an improved public perception is Operation Mayapple. Superficially, it would seem to be a ‘clean up’ exercise aimed at ushering all manner of ‘undesirables’ out of London and out of the UK, but, more than anything else, it has become a PR exercise, focused on trumpeting its raids and expulsions loudly and clearly, in an attempt to both appease the rightwing and drive the ‘illegals’ underground.  Social media – in particular, the Home Office’s Twitter account – is its favoured platform.  #OpMayApple was a particularly vulgar display of gloating at the disastrous, life-changing misfortune of hapless individuals at the agency’s own hands, and the stories are multiple: a Brixton butcher being frogmarched to the van, waiters deported from a Whitechapel restaurant, 16 rough sleepers sent back to India (the Home Office is thorough enough to assure us that the Highways Agency will “secure” the bridge they were sheltering under, just in case you were concerned for the bridge’s welfare).

Of course, beyond the media fluster, the statistics behind Operation Mayapple make grim reading: 2,000 ‘illegals’ have returned home since May 2012, 734 of whom being “forcibly removed”.  And the raids continue: last Saturday (15th), the UKBA descended upon Tiendas del Sur, a row of predominantly Latin American shops near Elephant & Castle Shopping Centre.  One guard held the door of one restaurant in particular – preventing entry and exit - while shock troopers checked the ID of both staff and customers.  So confident are the UKBA in their own authority that they swooped without so much as a police escort –quite what the impromptu doorman would have done had someone tried to leave the restaurant, for example, is anyone’s guess.  Moreover, doubts remain as to the legality of the raid, since the exclusive targeting of individuals of Latin appearance would seem to imply racial profiling on the part of the UKBA.

And the picture is no rosier outside of London.  In fact, stories are starting to emerge of the expulsion of European Union citizens.  A total of 17 individuals have been sent back to Poland, Latvia and Lithuania from Bognor Regis, as well as a further nine from Wisbech, Cambridgeshire (where a Tory councillor has been banging the xenophobic drum, undertaking to personally “drive [migrant ‘troublemakers’] to Victoria Bus Station”).  The expulsions are supported legally by the apparent failure of migrants from EU countries to ‘participate’ in British society, typically defined as either finding, or ‘searching for’, work.  Paradoxically, therefore – considering the reliance of anti-immigrant rhetoric on the notion of the benefit-dependant foreigner – a migrant choosing not to claim Job Seekers’ Allowance is actually far more likely to be sent home than one who does.  In fact, most EU citizens who have been deported have been sleeping rough.

Migrants – both documented and undocumented – represent some of the most vulnerable residents of the UK, and it should come as no surprise that they face an uphill battle, even to force the state to follow its own laws, let alone one to roll back border controls and allow for the free movement of individuals.  However, organisations are starting to emerge which seek to challenge the facade of consensus around the migration issue.  In London, the Anti-Raids Network – formed after the UKBA targeted Latinos in the queue outside a regguetón concert in February - has published a Bust Card in over 10 languages, detailing the legal rights of any immigrant caught in a UKBA or police swoop, as well as a guide for witnesses, as it commits itself to attending and detailing as many immigration checks as possible across the capital.  There is also the ongoing detainee support work of groups such as No Borders and Croydon Migrant Solidarity.

These are testing times for migrants in the UK, especially in light of the recent results of the British Social Attitudes survey, in which over half of those questioned apparently wanted immigration levels to “reduce a lot”.  A migrant-led movement for self-defence against the ever more bullish UKBA, with the ample support of neighbours and UK residents, is urgently needed.

This article was published on 21 September 2012 by the SolFed group in South London. Other recent articles: