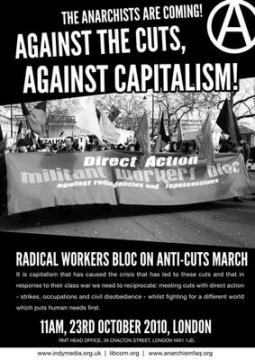 As the anti-war movement has shown, protest alone won't change anything. The government have already said that they will not be swayed by protests. Instead, we need a widespread fightback based in the workplace as well as the streets that acts in solidarity with fellow workers fighting these austerity measures all over the world.

We also intend to be a visible anti-capitalist presence on the demonstration pointing out that it is capitalism that has caused the crisis that has led to these cuts and that in response to their class war we need to reciprocate: meeting cuts with direct action - strikes, occupations and civil disobedience - whilst fighting for a different world which puts human needs first.

Bring red and black flags, banners and propaganda. The workers movement needs anarchist ideas and methods more than ever if we're to beat the cuts.

This article was published on 16 October 2010 by the SolFed group in Northampton. Other recent articles: