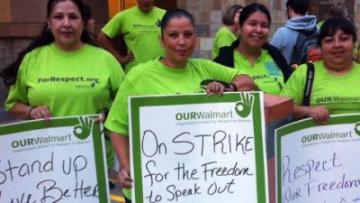 So what should radicals make of this?  First and foremost, we should support the strikers.  We should make an effort to understand how such strikes were organised, how they've spread, and why, at this particular point, Wal-Mart workers have found the confidence to strike.  Second, however, we should also analyse the potential pitfalls the so-called “viral strikes”.  Where does self-organisation end and trade union mediation begin?  How can we support the former and minimise the latter?

From Buy Nothing Day to Strike Day: Substitutionalism, Class Struggle, and the Crisis.

“Black Friday” is called as such because it's the busiest shopping day of the year in America.  It's the kick-off to the highly profitable holiday shopping season and, if retailers claims are to be believed, the day each year where they go from being 'in the red' to profitably being 'in the black'.

Not surprisingly then, Black Friday has long been a target of activists.  Prior to this year's strikes, this activism culminated in the Buy Nothing Day campaign initiated by the “social activist” magazine Adbusters.  For Buy Nothing Day, Americans are encourage to buy NOTHING as a protest against mass consumption and the consumer society.  Besides the obvious folly of such a campaign—folks are going to purchase Christmas presents one way or another, it makes sense to buy them as cheaply as possible—it's substitutionalist in the worst way.  Lacking anything close to a class analysis, the emphasis is not on workers or the power they have as the operators of the means of production and distribution.  Instead, it's on consumers, and their supposed power to step in to change the world.

All of this is tied up in liberal and often patronising notions of “exploitation”.  Exploitation is something which happens over “there” in third world sweatshops.  It's our job as western consumers to shame the likes of ASDA and use our consumer power to pressure companies and governments to play nice. The problems we have in the wealthier nations are not those of labour, but of consumption.  If only we consumed less, the world's problem would decrease in turn.

This author doesn't think that it's material wealth which keeps any working class from rebelling, but a lack of confidence in our own power.  In the US, no doubt, the ruling class promotes the idea that as the poster children for global capitalism, Americans have the highest standard of living in the world (and, if not of living, certainly of “freedom”).  But with the ever deepening crisis, such a façade breaks down more and more by the day.

The reality of outsourcing, temp work, and generally increasing precariousness of employment facing the global working class has undoubtedly hit home.  And, consequently, people are starting to fight back.

Understanding the Players Behind the Strikes

Before continuing, it's worth noting that there can be no doubt that salts from American trade unions have been gaining employment at Wal-Mart for years.  Wal-Mart, despite its incessantly aggressive anti-union stance, would be a massive prize in terms of dues money.  The boost in prominence for the union who 'broke' the chain would be massive.

For their part, Wal-Mart has suggested that the UFCW (for English readers, think USDAW.  Yeah, that shit.) is behind the coming strikes.  And in 2009 the CEO of Wal-Mart and the the leader of the massive Service Employers International Union issued a joint statement in support of President Obama's healthcare reforms.

In any case, the first strikes which have led us here began when outsourced warehouse workers walked off the job in California.  The workers were associated with Warehouse Workers United.  WWU are, in turn, supported by Change to Win, a large breakaway group from the main American trade union federation, the AFL-CIO.  As part of the strike, the workers began a fifty mile “pilgrimage” where they were supported by community organisations and faith groups.

Following this, outsourced warehouse workers in Indiana walked off the job, struck for three weeks, and won their main demands.  And in an unheard development, the workers went back to work with full back pay.

This time, the workers were supported by a workers centre associated with the independent trade union UE.  UE is generally considered to be, in American parlance, the “best of the business unions”.  The union is more democratic, more left-wing, and less tied to the Democratic Party.  It's also more likely to engage in direct action and challenge anti-worker laws, and more willing to fight as a minority union, even without recognition.

Interestingly, in both cases the workers made Wal-Mart and not their direct employer their public target.  Tactics like supply-chain organising and direct action by a non-unionised workforce, long advocated by radicals, made a distinct appearance in these strikes.  None of this is to say that the organisers of these strikes were radicals—I have no evidence one way or the other—or that such struggles won't eventually be recuperated.  But it is to say that there is at least a latent radicalism within the strike wave.

From the warehouses to the stores, shopworkers then began to strike.  By mid-October 28 stores in 12 states had been hit by strikes.  It's a safe bet to say that various trade unions, groups, and probably even some self-organisation has been behind the scenes in these stoppages.

Since the early retailworker strikes in Southern California, a group calling itself OUR Walmart claimed to be supporting the strikers.  Wal-Mart, for their part, have filed for an injuction against the planned Black Friday strikes and demonstrations.  The company alleges that the OUR Walmart is a project of the UFCW and that the protests constitute illegal pickets.

The Black Friday Wal-Mart strike wave could prove to be a watershed moment in US labour history.  It could be a rebirth of American labour, inspiring other service and retail workers to begin organising on the job.  Or it could more of the same: trade unions harvesting the inevitable anger that bubbles up on the shopfloor and using it to prop up themselves as the representatives of labour.

So, as radicals, what can we do?  For one, go to Friday's pickets and protests.  Begin making contacts with the striking workers.  Talk to them about about material issues and don't lecture them about politics.  Instead, offer to support them in ways and with actions that the trade unions won't.

Deeper political conversations will develop from there. Besides helping to push for more militant actions we can help to inoculate the workers against not only the inevitable backlash they'll face from management, but from the inevitable sell-outs they'll experience if trade unions are allowed to monopolise future actions.

This article was published on 22 November 2012 by the SolFed group in North London. Other recent articles: