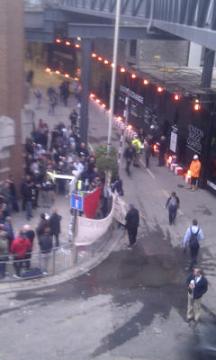 Today at the Shard site near London Bridge, around 200 site electricians protested against an attack by employers on their pay and conditions. The “Big Eight” of construction employers want to withdraw from the JIB (Joint Industry Board) agreement on pay, grading and seniority. They want to bring in new grades of semi­skilled electricians earning £10.50 and £14 an hour instead of the current hourly JIB rate of £16.25. It would also get rid of seniority, making it easier for employers to pick and choose who works on site.

As the recession has affected the building industry especially badly, the employers think this is a good time to take on the electricians, who are one of the strongest groups of workers in the building industry. If they win then they will attack pay and conditions across the board in construction.

Site workers spoke to us about bad conditions in the industry, accidents and long hours, and the agencies who often take about £4,000 a year from their pay. We talked to people who had been blacklisted and sacked. The industry is notoriously hard to organise in, and there are a lot of internal divisions and high turnover. The atmosphere was tense but positive, and after standing on the pavement for a while people blocked the access road to the site and turned back vehicles. The protesters didn’t try and stop people going in to work, as they are not on strike yet, but crowded around the gate talking to people and handing out information. Most people took leaflets and looked interested.

The first organising meeting, a rank and file meeting, had 500 people attend and elected an organising committee. In the last few weeks there have been protests at Blackfriars and the Westfield site in Stratford, and other sites around England. The next protest in London will be Wednesday September 14th at 7am at the Olympic site, Pudding Hill Lane DLR station. This is a huge site with the most electricians in the whole of London. People on the rally asked for as many supporters as possible to come to boost morale.

This article was published on 7 September 2011 by the SolFed group in North London. Other recent articles: