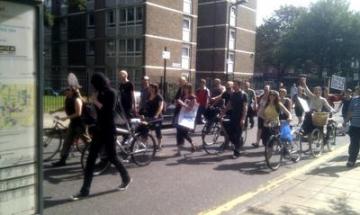 North London was alive with the sound of pickets yesterday, as hundreds of people around the boroughs stood outside their workplaces to take on bosses and persuade workmates not to cross the line. Focussing on the particularly vibrant borough of Hackney, North London Solfed can report a strong showing from the places we visited, with scabbing kept to a minimum - though sadly not every staffer had worked out that it's worse for kids to have badly-treated teachers than for them to miss a day of school.

Several Solfed members started out at Bridge Academy, the only one of the network of controversial semi-privatised schools to actually close down entirely, for its 7am picket. The building on Laburnum Street has seen increasing anger within the staff as teaching standards are attacked and pensions has piled on top of that. Picketers were backed by around a dozen early-risers who had come out in support. Despite a few people going in round the back, only very small numbers defied the picket line with several people compromising by staying on with the pickets until later in the day. Special mention goes to two people who'd spent the previous night making cakes for all!

At just after 8am, as part of a prearranged plan to get information and support to as many pickets as possible, Solfed members and others moved down the road to a picket on Falkirk Street, as teachers took on the tricky task of dissuading affected staff from going into the much larger site - it was actually difficult to tell if someone was scabbing, or whether they were going to a completely different workplace as cuts to the college have already led to some of the buidings being rented out to NHS staff.

A decent picket on the front gate was unfortunately light on the back gate, which Solfed members helped out on (invited, we should stress) as a few cars swooshed past and a manager joined us at the gate, undermining our ability to talk freely to people walking in. We also visited a PCS picket line on Drysdale Street, which seemed pretty upbeat and had some interesting things to say about how the place is being run at the moment.

After a problematic period however and with most of the walking in apparently finished, the pickets were in for a pleasant surprise when a mass mobile picket arrived to bolster the crowd, bringing it up to maybe a hundred strong by the time the speeches started. Following the picket and some refreshments, various North Londoners headed down to the march through the centre of London where, nasty political policing aside, there was an excellent 30,000-strong turnout and signs of some real militant feeling.

This article was published on 30 June 2011 by the SolFed group in North London. Other recent articles: