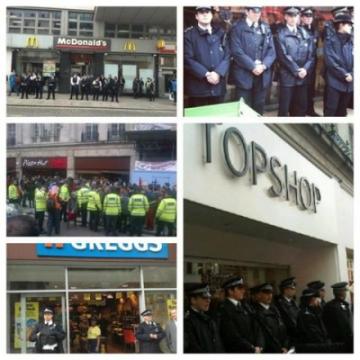 The first of May is international workers day. A day where we commemorate those six anarchists of Chicago who were convicted and executed after the Haymarket riot, a protest in 1886 over the 8 hour day.

This year mayday started early for some of us; with a morning demo at the Shard in London, called by the sparks rank and file group. This was in response to employers trying to block rank and file activists from even attending the on-going negotiations over the JIB agreement. We stuck it out for an hour or two in the bleak weather, then retreated back to the café for a break and a caffeine fix.

By midday we had joined others at Clerkenwell Green for the yearly Mayday march down to Trafalgar square. The march wound its way through London as the sun finally came out, it was as always attended by both trade unionists and others from across the political spectrum of the left. There was a solid radical workers block of several hundred from Solfed, the IWW, Occupy and others.

Once you get to Trafalgar square, there’s just the usual long, long list of speakers banging out the clichés and some decidedly oversized pictures of Uncle Joe, which generally results in most people taking the sensible option and quickly heading off to the pub.

Thankfully we instead headed off to central London where North and South London Solfed, supported by occupy had called a demo against workfare providers. We arrived at Bond Street  at around 4pm under the watchful eyes of the TSG. The police were present in high numbers on the day and at the time of writing it seems that there have been 3 arrests around the demo.

We marched along oxford street and back down to Covent garden picketing shops and charities involved in workfare schemes along the way, including various branches of MacDonalds, Topshop, BHS, the salvation army, Holland and Barrett and others including Boots, Pizza Hut, Greggs and more.

The 300 strong demo was a vibrant mix of people, we had some colourful banners and props, some inventive chants and some music as we hit the streets. This combined with the bright sunshine put everyone in a pretty good mood, the demo was able to successfully shut down a number of oxford street stores associated with workfare some of whom closed without a picket simply because they heard we were coming.

All in all the day was a success.  It’s important to remember that back in 1886 they were fighting for the 8 hour day, in most retail outlets and their supply chains this still doesn’t exist well over a century later. Workers there work long shifts and long weeks often for low wages. Workfare adds insult to injury by making people do that for £65 a week and by driving down wages and peoples power at work even further. The campaign against it continues.

Report and pictures can be found here
http://london.indymedia.org/articles/12161

This article was published on 3 May 2012 by the SolFed group in North London. Other recent articles: