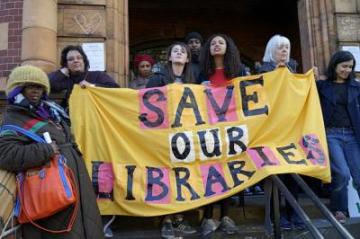 Today an IPO eviction order was served on Carnegie Library in Lambeth, which has been occupied since 1st April to stop it being closed down and turned into a commercial gym. Milet Library on the deprived Angell Town Estate has also been closed down and Waterloo Library and others are threatened.  I visited the library on Sunday.

Walking from the station you could have found your way just by following the “Save Our Library” posters displayed in people’s windows.  There were about thirty people occupying inside, including lots of children, and about eighty supporters  outside on the steps and the pavement. Cars driving by constantly honked in support. People arrived carrying bags of food for the occupiers which were passed through the barred gate. Council guards are securing the other exits so occupiers can leave but no one can enter. The occupation was very cheerful and upbeat, with small children reading books on the steps and someone came and requested a book which was found, logged out, and passed through the gate to him by occupiers.  At one point all the occupiers came to the gate and the children led everyone in singing protest songs.

The crowd outside on the steps, including the Carnegie librarians, explained to me how important all the library functions were for people especially for people suffering under austerity. People needed  to  access benefits online now and used the library computers to do that. Families in hostels brought children to the library so they could read but also because it was somewhere you could get out of the house without needing to spend money. The library is housed in a beautiful old building which also has a small garden so the children can run around.

The occupiers are still inside, look up SaveLambethLibraries or #carnegielibrary for more information about defending the library.

This article was published on 5 April 2016 by the SolFed group in North London. Other recent articles: