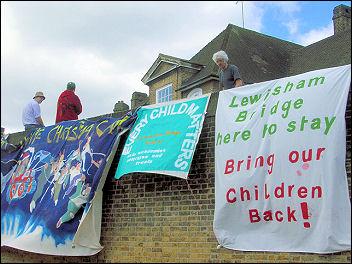 To the dismay of head-teachers everywhere, this year has seen a marked rise in parent militancy in response to closures and handovers to private companies.

The agenda of handing community schools to private interests means less accountability, selection procedures, job insecurity, and a focus on grades to the detriment of education and care. Facing closures, academies and foundation schools, people up and down the UK have resisted with grass-roots campaigns and, in several cases, occupation.

The first occupations occurred in Glasgow where twenty-two schools are threatened with closure, as part of a council plan to plug a £6 million overspend. Wyndford, St Gregory’s, Our Lady of the Assumption and Victoria primary were occupied in April and Wyndford was subsequently reoccupied in June. Soon after, Lewisham Bridge primary school in London was occupied by parents after the council voted to demolish the site and hand the school over to the medieval Leathersellers livery company as an academy school.

In early May parents at Charlotte Turner, a primary in Greenwich, took the building to fight a planned closure. In all cases there had been a ‘consultation’ resulting in overwhelming majorities opposed to the changes and in all cases these were ignored. With official lines of negotiation an obvious sham, direct action became the only weapon left to the parents.

Of the occupations, only Lewisham Bridge has achieved some of its goals; the children will be returning to the school in November, the building remains and it is still not an academy school. Although this was nominally achieved by an English Heritage listing, the force of the campaign and the media attention it got undoubtedly played a big part.  Even without victories (Wyndford and Charlotte Turner have been closed), the occupations have brought self-confidence to participants and bolstered campaigns frustrated by officialdom. There is a new willingness to take action for our schools and every occupation is an example to the next.

With coming cuts in education and the onwards march towards privatisation, we should expect more campaigns and more occupations. Both main parties plan to attack education after the next election. Labour’s Ed Balls’ claims of savings in education can only be achieved by merging schools and making them ever bigger. The Tories intend to take more schools out of local authority control and into unaccountable companies.

With a pay freeze on the way, education workers will be involved in their own struggles. If the school campaigners and workers can act together we could see more victories in this academic year.

The workers will be able to draw confidence from the support of parents, so long as parents are actually able to speak to staff, something that the unions have tried to block in some cases. However, the student occupation at SOAS in support of detained and deported cleaners demonstrated the solidarity links that can be made, as did the vociferous student support at Tower Hamlets College (see pages 4-5).