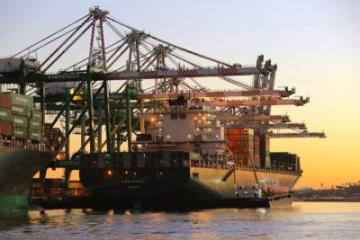 Dockworkers across the USA stopped work on the 9th June in a show of support for George Floyd and the Black Lives Matter movement.

Workers with the International Longshore and Warehouse Union (ILWU) stopped work and lay down their tools for an 8 minute and 46 second moment of silence in honour of George Floyd and all victims of police brutality.The 8 minutes and 46 seconds is representative of the amount of time George Floyd was pinned to the ground by Minneapolis police officers on May 25, 2020.

The ILWU represents dockworkers primarily on the U.S. West Coast with approximately 40,000 members in 50 local unions in California, Oregon, Washington, Alaska and Hawaii, as well as British Columbia, Canada.

“Our union has a long history of confronting racism on the job, in our communities and around the world,” said ILWU International President Willie Adams in a letter to ILWU Coast Longshore Division.  “Today we’re joining millions of people who are demanding justice and fundamental change.”

This article was published on 10 June 2020 by the SolFed group in Manchester. Other recent articles: