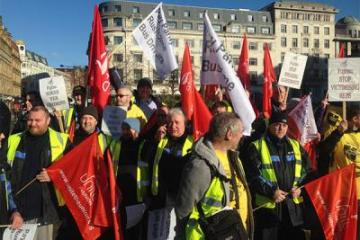 Friday the 26th January saw strikers from three disputes in Manchester stage a joint demo and rally. Hundreds of supporters joined the demonstration and attended the rally where strikers from Mears, First Buses and Fujitsu  gave an update on their long running disputes.

The Mears dispute involves 180 building workers employed by Mears to undertake housing maintenance work on 12,000 properties in Manchester. The contract was tendered by Manchester council.  The workers took 40 days of strike action last year over pay differentials of up to £3,500 and attacks on their terms and conditions. A further ballot saw an increased majority vote for further 49 days of action, due to end on February 8th.

The Speaker from the Mears dispute made it clear that the strike was not just about pay but the detrimental treatment of workers during the dispute, attacks on workers’ holiday entitlement, allocation of work to sub-contractors, treatment of apprentices and trainees, and proposed unilateral changes to working hours and conditions for some of the affected workers.

He was scathing about Manchester City council- all of Manchester’s 95 counsellors , belong to Labour, the city is virtually a one party state - outlining a series of broken promises by council leaders and the fact that not one Labour councillor had attended picket lines or offered any kind of support. A further speaker highlighted the fact that the head of Mears, before he recently resigned, was being paid £190,000 p.a. and had awarded himself more in pay rises over the last 5 years than the whole of the 180 workforce put together!

The dispute is over compulsory redundancies, victimisation of reps and breaches of redundancy agreements. IT workers at Fujitsu in Manchester have already taken 29 days of action in this long running campaign and plan further  strikes  on Tuesday 30 January and Thursday 8 February – Wednesday 14 February. Union members are also taking part in action short of a strike and are working to rule.

The Speakers from Fujitsu outlined the bullying and intimidation tactics used  by management against IT workers employed in Manchester. They explained that one worker was dismissed after submitting a grievance about sexual harassment, she was dismissed without her grievance even being heard. Lynn Hodge, a union rep, was stopped from doing most of her job in May 2016 and her colleagues were instructed by management not to work with her. She was recently moved to another department where she now faces the threat of being made redundant. Another union rep, Dennis Morris, was selected for redundancy on the basis of scoring that mainly focused on his reps role and his disability rather than his skills and knowledge. Ian Allison, a union rep with over 30 years service,  was dismissed on January 12th while on compassionate leave attending a family funeral, without even being  allowed to work is months notice.

It was also explained that there was strong evidence to show that people were being selected for redundancy on racial grounds or the fact that they were disabled. Out of the six people currently fighting redundancy the majority were from an ethnic minority and a majority were disabled. This despite the fact that only a small minority of the overall workforce were from an ethnic background or disabled. Further Fujitsu had agreed to release the findings of a study into how many people they had made redundant were disabled or from an ethnic background only to renege on the agreement just prior to the resulting being published. The speakers also stressed that just like Carillion, Fujitsu is another example of a company receiving millions of pounds of public money, while being allowed to discriminate against and mistreat workers.

For ways to support the Fujitsu strikers, including signing an online petition go to https://ouruniontest.wordpress.com/fujitsu-national-dispute

First bus drivers at the Rusholme Depot in Manchester are involved in ongoing dispute over pay. Drivers at First Manchester  Rusholme depot are being paid up to £5000 a year less than colleagues working at the First’s Queen’s Road Depo based just five miles away. The drivers at the Rusholme depo originally worked for Finglands Buses who were taken over by First Manchester in 2013. At the time of the takeover the Finglands drivers were promised parity but after repeated promises by First to harmonize pay, drivers at Rusholme still find themselves being paid 23% less than the all the  drivers in the company.

The speaker from the First Bus dispute informed the rally that the the dispute was now into the 17th week of strikes, and that the strike had now escalated to Mondays, Wednesdays and Fridays on alternate weeks. He pointed out that the reason given by First Buses  as to why they were discriminating against one group of drivers  by paying them less than drivers doing exactly the same job was on the grounds of cost. Yet First Buses are part of the First Group  the biggest transport company in the world making massive publicly subsidised profits each year. He also explained that First Group had a history of anti-trade union activity in the USA. The speaker finished by urging people to boycott First Buses on strike days.

This article was published on 27 January 2018 by the SolFed group in Manchester. Other recent articles: