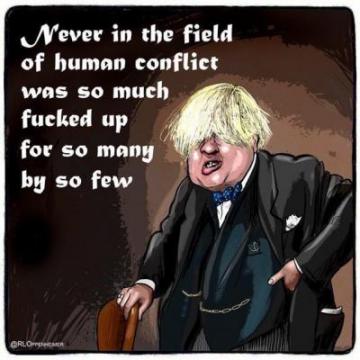 As the ‘partygate’ row reaches fever pitch, it’s worth putting things into context. Politicians and their various hangers on in the media may be getting a touch overexcited but, in the end, what does it really matter? If Johnson goes or stays, in a few months’ time it will be all be forgotten and the whole circus will have moved on to the next big issue.

The whole point is that the Westminster bubble is totally detached from the day to day lives of ordinary people. Sure, issues like ‘partygate’ do, to use the phrase so beloved of political commentators, “cut through” to ordinary voters because they expose just how obnoxious and arrogant the current Tory Westminster elite truly are. This may cause people to engage with the political process briefly, but once the circus has moved on, they will be back to worrying about day to day issues that affect them directly.

It is this detachment of the political parties from people’s day to day lives that ensures that they can never be the means of bringing about fundamental change. This is not a criticism of Labour Party members, many of whom want to seek fundamental change. Nor is it saying that life would not be better under a Labour government.

What we are saying is that the enormous problems we face as a society are not going to be solved by an elitist detached parliamentary system. It is a system that, by and large, only connects with the day to day lives of people once every few years come election time, or when yet another political scandal breaks through the general inertia and growing alienation felt by many people towards the political process.

Nor can this problem be fixed. Parliamentary politics does not set out to engage and involve people; quite the opposite. By its very nature, it is a system based on representation under which MPs are elected to act on our behalf. People’s involvement begins and ends with the simple act of voting. Elected MPs are then free to act in any way they think, supposedly in your interests, to the extent that they are free to switch sides and decamp to the opposition.

Parliamentary democracy breeds inactivity which is the very opposite of what is required. Given the massive problems we face as a society, leaving everything to be solved by your MP is not going to cut it. Rather than sitting back in the vain hope that Parliament will do something, we have to take control ourselves and begin to challenge the rich and powerful in order to bring about the fundamental change needed in society.

To do this what is required is not a more militant political party but a mass organisation, rooted in the day to day lives and struggles of ordinary people. By its very nature, this has to be an organisation based on direct action, which is the only form of organising that is based on direct democratic control, under which those involved can control and direct their own struggles. This is not about relying on your MP and Parliament to bring about change; it is about getting out there, getting organised and taking action against the powerful.

This form of organisation is hardly new. One of the biggest shifts in power ever to take place in Britain occurred in the post-war period when grass roots trade unionism, centred on the shop steward movement, used mass participation and direct action, in the form of wildcat strikes, to put the fear of god into Britain’s ruling class. In the process, this narrowed inequality in Britain to levels never seen before, or since.

In highlighting this, we are not advocating some nostalgic return to the past. Nor are we saying that post-war militant trade unionism was perfect – as someone who was involved, I can certainly say it wasn't – but rather, we are looking to the best of this post-war movement to inspire and fashion a new trade union movement. This new movement, while centred on the workplace, is one that involves itself in all struggles, from the fight against climate extinction to the struggle for trans rights.

This article was published on 23 January 2022 by the SolFed group in Manchester. Other recent articles: