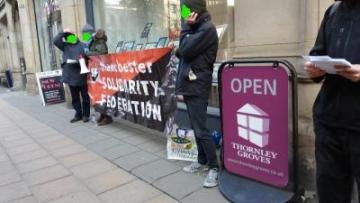 Manchester Solidarity Federation organised a picket of Thornley Grove Letting Agency in support of a Brighton tenant. The tenant has been organising with Brighton SolFed after deductions were made from her joint tenancy deposit, despite the fact the tenants left the property in a clean condition. The deductions were unreasonable, not properly costed and, on top of this, service from the agency was poor throughout her tenancy.

Manchester Solfed organised the picket of Thorney Grove as it is a sister company of Brand Vaughan, the Brighton letting agency that had deducted £390 from the tenant’s deposit. Both companies are part of a UK capital investment company, Lomond Capital, which owns 34 UK letting agencies. In total Lomond Capital manages residential properties worth £2.7 billion and sells £600 million worth of property every year.

The response of this multi-million pound company with huge resources, which boasts of its “high levels of customer service,” to the Brighton tenant’s complaints was to treat her appallingly. They first tried to ignore her, and then belittle her, before moving on to intimidation through the use of legal threats. When these tactics failed, the company then tried to claim that problems with the tenancy were not their responsibility. This is despite the fact that the landlord of the property is Tom Ghibaldan, chief executive of Brand Vaughan!

The Manchester picket of Thorney Grove was a great success with the letting agency closing early at 12.30, instead of the normal closing time of 16.30. During the picket we were approached by ex-tenants of Thorney Grove who informed us of how badly they had been treated by the company. This came as no surprise given the fact that reviews of the company are full of comments such as “they will charge you for work that is never carried out"; "took months of battling to get back the money that was ours to begin with"; ”absolute disgrace of a company”; ”worst of the worst” and so on.

Arrogant companies such as Lomond Capital think they are so big they have the power to ignore, bully and intimate tenants. But here at Solidarity Federation we are determined to support the Brighton tenant and we are demanding that the £390 deducted from her deposit be returned. We are also demanding that the company pay £541 in compensation for poor service and the stress the tenant has suffered as a result of the company’s bullying tactics.

You can support our campaign by either emailing the company at hove@brandvaughan.co.uk or calling them at 01273 22 11 00 and expressing your concern

HAVING TROUBLE WITH YOUR LANDLORD OR LETTING AGENCY AND WANT TO FIGHT BACK EMAIL  US AT: mcrsolfed@gmail.com

This article was published on 26 February 2018 by the SolFed group in Manchester. Other recent articles: