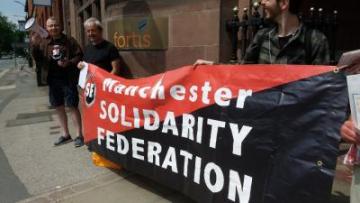 On Monday (June 4), Manchester Solidarity Federation demonstrated outside the head office of Fortis Student Lettings in Altrincham, near Manchester.

It was an action in solidarity with a group of tenants renting in Chester through this letting agency. Fortis had allowed unacceptable delays in carrying out basic maintenance resulting in tenants living, for example, with damp and mould, or without hot water for months: https://www.facebook.com/pg/ fortishorrorstories/posts/. The tenants are now asking Fortis for compensation and the agency keeps ignoring them or to engage in any attempt at mediation.

After trying unsusscefuly to talk to someone from the Fortis management, we went ahead with our picket outside their office. With a banner, a megaphone and leaflets, we spread information about the dispute and received lots of supporting messages from the public, including plenty of toots by vehicle drivers.

In response, Fortis closed themselves off in their office, stopped receiving people and called the police (just to waste police time). However, we stayed outside for a couple of hours showing them that they cannot get away with their appalling treatment.

This is just one more case of a letting agency abusing their tenants, but in this case some of the tenants have decided to organise and fight back.

This article was published on 5 June 2018 by the SolFed group in Manchester. Other recent articles: